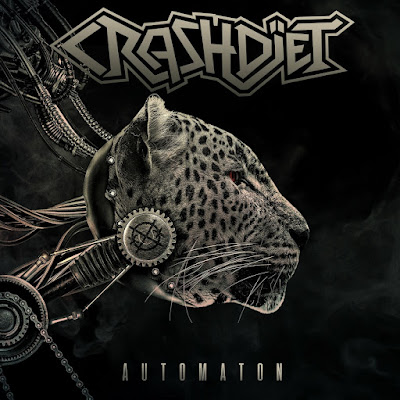 This band has been in my awareness for some time, as I have watched the hair metal revival of the mid 2000s from the corner of my eye. Though I have really only been impressed with Vains of Jenna. Like most of the higher quality stuff in this vein, this band is from Northern Europe. These Swedes have been at it for over 20 years, so are still going pretty strong as this has a big sound and is very polished. The first song makes me think of a power metal version of Bon Jovi. The second second is more upbeat, though not as power metal in it's intentions as "No Man's Land". In the 80s there were plenty of bands that kind of bridged the gap between power metal and hair metal , Queensryche being one of them.

As far as songwriting goes , I think "Darker Minds" is stronger than the two previous songs, though the ghosts of Myspace haunt their overall sound..   "Dead Crusade" is a more accurate take on the 80s sound though pumped up with a really well produced guitar sound, well at least for this sort of thing. Sometimes this plays against them as the song "Powerline" is to happy for my tastes and reminds me more of bands like Europe. They bounce back from this with an almost "Cowboys From Hell" like aggression to "Resurrection of the Damned".  Generally this hovers near the edge of what kids these days consider metal, largely I would agree this albums drifts more into hard rock territory.  The bright melodic choruses contribute to this. Their singer has a decent set of pipes on him though not a great deal of grit to his voice. With that said this is still a heavier album than the new Ghost.

"Shellshock " does not work as well to keep the cheese that normally coast this sort of thing from beginning to ripen upon it. Perhaps it is the gang vocals on the chorus. The guitar tone on "Unbroken" is too Dragon Force for my tastes. I think the melodies are a little heavy handed on this one. It closes with the ballad "I Can't Move On" , which has some great guitar playing and his voice excels here. Of all the sounds they have brought to the table here it might not be the one I prefer the most as it is more like Extreme , but they make it work. I will give this album a 9 as for what they are doing they have excelled at it, the things I do not like about it are more stylistic choices.