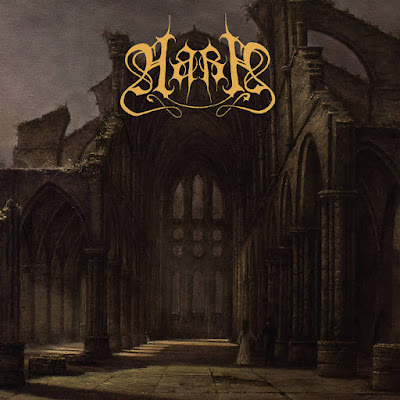 I seem to recall reviewing this Swiss band before. To the best of my memory, though things start getting cloudy once we get to the bulk of the more conventional black metal bands who just live and die by a steady diet of blast beats, I seem to remember this band having a sound that set them apart from the pack. By the second song it is clear this is not the case, they are consumed with the sonic fury of blast beats, The manner in which this is executed does focus on more of a sonic sweeping than conventional metal way of doing this. The screamed vocals are more of a texture under the sonic swarm of guitar.

The addition if female vocals on "the Sun of Night" provide a much-needed color to broaden the sonic dynamics in terms of making this song not just sound like another feral gallop into unrestrained wrath. The screamed vocals continue to do what they have been doing for the first two songs.  "Das Dunkel Der Welt" just blasts right past and forsakes any progress in redefining the sense of dynamics established in the previous song.   They use a similar monochromatic assault on "Strepitus Mundi". Sure there are guitar melodies buried in the blur and more is going on than just blasting for the sake of it, but it is pretty buried in there.

The last song pretty much just picks up where they left off with the last song, the drums do not even have to change. There is a more mournful feel to the guitars, but they are at the same tempo. The arrangement does shift in an Immortal like manner though at more of a warp speed blast than what they used to play at. I will give this album a 7.5, the overall sound is effective they just sacrifice most of the dynamic for the need for speed that dominates this album.