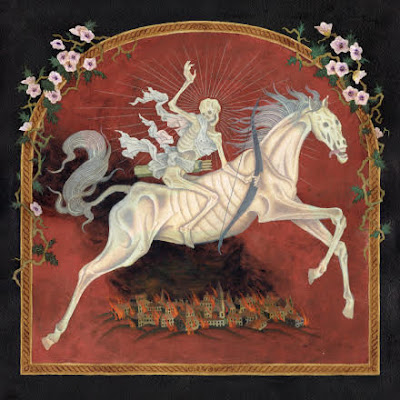 The second full length from this band that features the former Ashborer guitarist Kyle Morgan.  Where Ashborer were one of the forerunners of the American atmospheric black metal scene, this band is more straight forward black metal. Most of the ambiance comes from the reverb heavy mix, that creates a cavernous feel to what is going on here. The doom influence that seeps through odds a very melodic quality. The guitars excel on the first song at creating a romantic darkness with the choice of intervals employed. There are bursts of speed interjected, but double bass is far more common than blast beasts. Which I am fine with after all how much more can the tired old blast beat trope, be elaborated upon decades later. The song ends with dynamic almost neo -classical mood.

"Wracked By Sacred Fires" sounds like oddly mixed Watain, if they decided they needed more guitar harmonies rather than big riffs.  In terms of songwriting, they take one theme and work off that, the title of the song is snarl at times, but I am not sure if I would call it a chorus as there is little in the way of hook to it. There is some dexterity in the playing when it comes to the harmonies employed in almost a early Iron Maiden manner or  even Merciful Fate could be a fair comparison, in terms of the guitars . In fact that kind of dark Fate like vibe might be what I like the most about this . Another way to say it is if you combined Darkthrone with Emperor , the results might be similar.

"Death and the Twilight Hours" is doomier at first. It works in a more conventional song structure, though without the hooky or anthemic chorus. When it builds up there is almost a thrash like feel to the guitars.  They come closer to blasting off into a tempo more common in black metal on the last song. The execution of this has more in common with Dissection than Marduk or Mayhem. While Dissection is one of my favorite metal bands the shadow of their influence is not enough to keep this from treading too closely to your more run of the mill black metal. Not the strongest song of the album, that otherwise draws from many brands of blackness that resonate with me ,so I will give this one a 9.