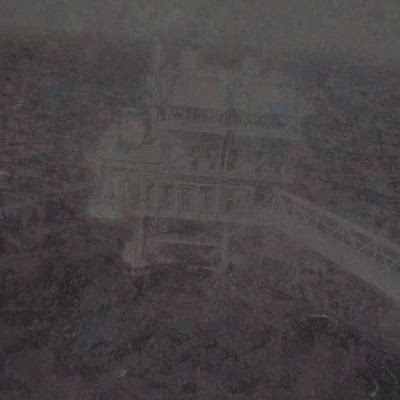 The emphasis of what this Swiss band is doing seems to be something closer to a flowing form of post-rock not unlike some of Mogwai's dreamier moments. There is a guitar work sound, though they are not just nod twiddlers. A Pink Floyd like strum keeps the shoegazing moving. The title track that follows the more spacious opener finds them bringing down distorted chords with a more doomed out deliberation. There is an angular hesitation to how the riff connects.  Vocals are belted out on this one male and female in unison with a great deal of soul and passion to their delivery. The male vocal builds into a harsher scream. The song breaks down and the more blues based female vocal shines on its own. The dynamic swell of the song is pretty impressive.
"Speechwriter" which at over fifteen minutes promises to be another sprawling epic, gets started in a more hesitation and minimal manner.  The guitars hesitate to let the reverb heavy guitars ring out. Once this drone lingers past the seven-minute mark it begins to wear thin. Then by eight minutes in they begin to build up in a manner that makes me think of Godspeedyoublackemperor !, the more manic vocals that come in have a Roger Waters feel. They build it up into a crusty fury.  "Horse Funeral" finds them back in the slow core minimalism. Letting timid chords ring out with faint drums barely tapping a cymbal. The build is even slower than the previous song with a guitar solo wailing carrying it forward.
This carries over into "Cineaste Cineaste" thought the focus shifts to a more subdued and straightforward folk like vocal. The song ambles down this almost psychedelic path.  while not metal at all in its intentions for the bulk of the song things get sonically heavier as the attack shifts about midway into the song.  This proves they can really knock it out of the park when they want to and do not have to rely on droning you into submission. They "Jubilant Howl" that closes the album is another elf like meandering piece of trippy folk. High reedy vocals give an almost Neil Young like narrative to this.  About eight minutes in it does get more ominous and snarlingly heavy. I will round this down to an 8.5, due to the droning often taking away the focus from compact songwriting that might have made this an album I would have listened to more frequently, but if you like post rock with a side of sludge take a listen to this.
Posted by Wilcifer at 7:36 PM