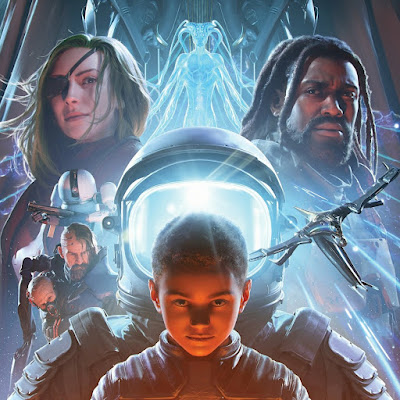 Earlier in their career the band stated that they were not Rush fans, which seems pretty absurd, as they are pretty much the emo version of Rush. Though they are dwarfed by Rush when it comes to raw talent. The first song does not embrace the more metallic edge they have displayed on past albums and finds the band leaning into mor of the Warped tour pop they have sometimes clung to during the Myspace years. The harder edge rock does rise up on "Shoulders". Where they have shown a proggy inclination in the past this go around is very straight froward. Almost too much so. The production is very big and finds the overall sound to have more mainstream rock appeal.
Not even pop-punk, "A Disappearing Act" crosses right over into pop. If you wanted to hear a band sell out well this would be that moment. On one hand there have been moments in the past where Paramore was playing at the gym and I mistook it for Coheed, so I had foreseen this coming, perhaps a decade ago. There is a little darker tension to the groove of "Love Murder One". Even the more radio friendly hook in the chorus works better for who they are than what went down in the previous song.  But is this "Welcome Home"? Um no.  I can make more Michael Jackson comparisons than Rush here. Or perhaps the Police on the riff leading into "Blood". They do a better job of making pop music on "the Liars Club" which puts them more in the league of Fall Out Boy.
They sound pretty much like the Weeknd on "Bad Man".  "Our Love" is pretty much just terrible any way you slice it. It might as well be Bruno Mars. I could not make it all the way through the song is how bad it is. Which has not happened in some time. "Ladders of Supremacy" is back closer to their older prog sound. The song after this one leans in this direction as well but is less focused. The album closes not far from this but something more along the lines of Meatloaf and Michael Jackson writing a song for a "Nverending Story Remake" but with less focus than those two might have, I will give this a 7, which feels like a lower score than it is, considering how good this band used to be in the early 2000s.
Posted by Wilcifer at 10:55 AM