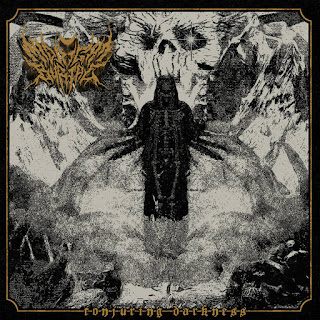 I think there is a lot to like about this band from Texas. I speculate this as with most forms of extreme metal, the raw power that bulldozes you into submission with the sonic weight of what they do is impressive enough to make you question what the finer points of songwriting are. However, when I looked up at the screen of my laptop to realize I was already three songs into the album I slowed down to give a closer listen.  Since that could mean it is hard to tell where one song begins and the other ends if they begin to sound the same. One point that gives this weight is how their sound is weaponized atmosphere. They have a unique sound until it comes to the low growl of the vocals that sometimes sounds to be random growls strung together to have a layer of human to the overall sound. The uniformity of the vocals is what keeps this sound with a certain confined range.

This makes the second song not as impressive as the opener. The drums to "Caverns of Sorrow" want to take this in a more deliberate doom direction, but the sonic sprawl of the guitar resists. The vocals do what they have done for the first two songs. It causes this to devolve into a mushy cacophony of swirling guitars presided over by the monotone growl. " Solemn Death Encompass" is very creepy, but pretty much just an interlude as it never progresses into an actual song. "Oceans of Silence" is a little more convincing in its sonic swell, at least enough so that block out the vocals that are the verge of being annoying at this point.

I was two and a half minutes into "Light of Eternal Darkness" when I realized it was not the previous song. The uniformity of sound pretty much rests on the lack of vocal colors. The interplay of instrumentation is interesting but needs more to work with from the vocals.  The last song things come together well and it ends playing to their strengths. Overall I enjoyed this album, the concept of atmospheric doom alone is a selling point, the execution could have been grounded more in the songs, I will give it an 8.5.  If you are looking for something different and dismal this is for you.