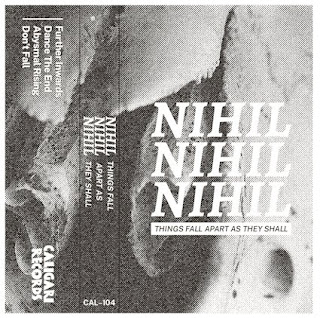 The first ep from this German duo blends a gloom encrusted aggression and heaviness with the kind of stark tension we expect from post-punk, though the angular riffs do this with almost mathy twists and turns rather than just droning on simple palm muted riffs.  There is almost a doomy heaviness to what they do. "Dance the End" carries a death rock feeling to the creepiness. The baritone vocals are more emotive than the monotone Ian Curtis impersonation most of these kinds of revivalist bands stick to. The bass is burly and growls under the clang of guitars.  Musically if I was going to pick a band this comes closes to it might old Siouxsie and the Banshees.

Vocally, his performance sets them apart from their peers as his voice goes down into an impress croak, that is as low as Andrew Eldritch, the big difference is there is no attempt to lure you out onto the dance floor here. Perhaps the title is making fun of these attempts, I have not listened to the lyrics too intently. The only concern that arises for me regarding these guys is on "Abysmal Rising" . It kind of feels like an extension of the previous song. There is a more punk swagger to it. The guitars are less adventurous than they are on the first track and the drums just kept a straight up mid temp punk beat, until the parts where the changes shift and they hammer harder. I guess what I want is to hear more melodic colors and instead I get them just beating into the song.

The close out the ep with a cover of the Chamelons "Don't Fall". They do a good job of it , though considering this is an ep I would have preferred another original from them in order to get a better taste of who they are as a band. Anyone can do a cover, though they do make it their own more often than not, it does not really take their sound in directions the first three songs did not elude to though it is more on the death rock side which I am a fan of . I will give this album a 9, I a curious to hear more from these guys and glad to have them on my radar as they are more on the death rock side of the equation.