the Smile : "A Light for Attracting Attention" 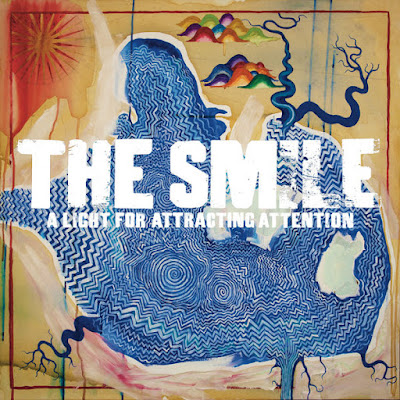 Obviously, a band with Thom Yorke and Johnny Greenwood is going to sound like Radiohead. The main difference is drummer Tome Skinner who played with the jazz band Sons of Kemet. He can be felt the most on the second song 'the Opposite" which finds them locking into a much different groove than what you might expect from Radiohead. I think the rowdy punk tension of "You Will Never Work in Television Again" made some members of the press fooled into thinking this would be return to the scrappier younger days of Radiohead. Why should it be? After all this is not Radiohead?
I am sure many of these songs were intended to Radiohead, but I can imagine the pressure which comes with writing for a new Radiohead album was one thing they wanted to get away from when writing this.  Yorke's voice still has it, as he goes up into his falsetto for "Pana-vision".  The palm muted groove of "the Smoke" works like disco Fugazi. Thing drift off in the ambiance of "Speech Bubbles" until the guitar comes in to bring it together. It is pleasing to the ears but falls short of the level of songwriting heard on the first five songs. They get back into guitar groove with "Thin Thing" that weaves around a surreal exploration. They slide back into dream land on "Open the Floodgates". The first song that really invokes earlier Radiohead is not their rock side but the more strummed Brit pop folk balladry of "Free in the Knowledge" . This is not the only song that finds them in more familiar sonic zip codes as "a Hairdryer" could have come from "OK Computer".
There are also equal doss if synth laden ambiance, creating ghostly introspection, that are moodier than they are dark. Johnny Greenwood has been scoring films and that can be heard as an influence on this album as well. Chances are if you are listening to this album in the first place you are a Radiohead fan so the moments where they cannot escape their legacy, while serve as moments to celebrate. Sometimes they rock this out a little bit as shown on "We Don't Know What Tomorrow Brings".  The last song also does this but to a more dream induced result. I will round this up to a 10 as even the more atmospherically focused moments are still doing what these guys set out to do and how my ears receive them is dependent on my mood .

The Smile | Skating On the Surface [Subtitulado] from AllredX on Vimeo.