HUSH: " The Pornography Of Ruin" 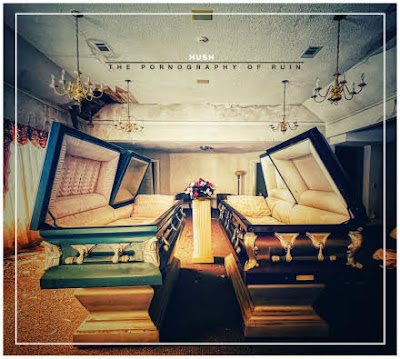 There is more of a doomy mood to the much-heralded crust sludge promised by this New Band when the album opens. I can see how it would only be a few dynamic turns for them to get there and the influence of Neurosis is all over this one. The tortured cave man groove emerges when enough pressure is applied. Though this happens on the second song which I am two minutes into before I know that is where we are in the album, which means things have a rather uniform circle of sound they work within. The song ends up going in a little more stompy direction than the first one. They go into a straightforward metal attack with "There Can Be No Forgiveness Without the Shedding of Blood".  Some of the riffs have a more angular twist to them so it is not really Pantera territory, but the coarse vocals seem to grunt with no rhyme or reason.

They go on more of a journey for "By This You are Truly Known". It begins in a more deliberate sludge ridden simmer and finds them in a softer almost Pink Floyd like whisper, before roaring back into more of a pounding. While it follows a path paved by Neurosis, they do manage to make it their own here. The vocals seem to be even more of an ugly shouting for not reason, I am sure they are making noise rather than exclaiming lyrics on "And the Love of Possession". On the other songs when there was more to distract you from this fac t they worked better. After this song there is an 8-minute atmospheric piece which is more of an interlude with spoken word than a song as it hovers rather than going anywhere melodically.

The last song the grunted vocals offer no more purpose than haphazardly agonize over guitar that is trudging to find similar purpose. This band has too much potential to waste it on senseless pounding that loses context until things break down about two and a half minutes into the song. The lingering post-rock depression is meanders on is more pleasing to the ears. I will give this album an 8, I am rounding it down as the vocals began to annoy me with their lack of purpose. Not everyone is into purposeful vocals when it comes to metal so you might be more forgiving than I in this regard, I do like how dark and downtrodden the mood of this album is.