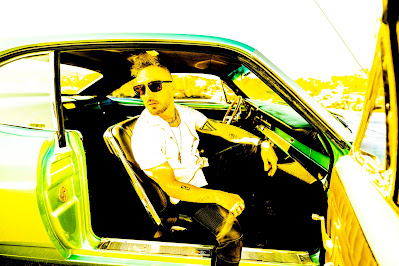 Not a huge fan of Dillinger Escape Plan I do have a great deal of respect for them and have heard most of Greg's solo work. This album is a great deal different in that it does not try to emulate new wave from the 80s he has moved onto the 90s , the opening track is more of a grunge ditty with more influence from bands like Soundgarden and Alcie in Chains.  "No More Lives to Go" is more driving, but still sounds like it would be filler on a Filter album. "Never Wanted That" relaxes down into a darker alternative rock , with a Cure like guitar line that floats through the song , which might be the best part.

I heard "Lowered" going into this album and it interested me due to the fact that Reba Meyers from Code Orange is on the song. Her voice as improved a great deal over the years and the 90s goth this song turns into is very fitting for her as it has a Curve like feel. This song also comes closest to the solo work of Puciato thus far. "We" also leans into more of an electronica feel, and is more subdued and introspective than rocking out.  By the time it gets to the chorus it has shifted into the more future pop side of darkwave.

" I Eclipse " pretty much hovers in the Deftones sonic back yard.  When the song builds up it is less derivative.  He finds a more original sound with "Rainbows Underground". It does work off the soft to loud dynamic that became big in the 90s post-Nirvana. "All Waves to Nothing" finds him going for a more rowdy form of aggressive noise rock. Not unlike Tomahawk or the Jesus Lizard . I iwll give this album a 9.5, with that said I am not sure how much I am really going to listen to this in my free time, but he has done a great job of what he does even if it splits the difference between the Deftones and Alice In Chains half the time.