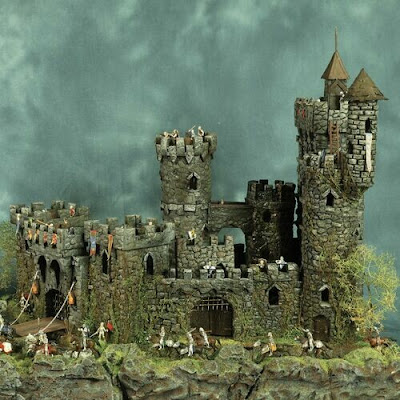 Was not expecting this album to open up with the kind of dark dense metallic crunch they pack for the brief opener. Then things get more melodic for "the Kiss". The high thin reedy treble of the vocals feels like a mix of Billy Corgan and Tom Petty. By the second song I find myself having to get used to the singing. There is a more upbeat punk vibe to this song. The vocals have a very pinched feeling not unlike Dave Mustaine or Axl Rose. "Wasted Little Heart' has a much better groove to it.  I dig the darker moodier vibes of "Hear My Word" time we get to "Spellbound" I  am fairly confident too many metal heads are snoozing on this band, which is heavier than most suspect.
"Dear John" is just an instrumental interlude leading up to " And Watched it Glow"  that is driven by a pretty powerful throb. The band's light to to pull this kind of thing off despite the whine of the vocals. "Holy Water" is marginally more upbeat, the guitars continue their crunch. This time more straightforward. They trun to more overt metal attack with the fiery riffs of "Sacrifice" . It could be argued that a band like Ghost employs a similar approach with softer poppy vocals set against a harder edged  drive of guitar, but these guys are heavier than Ghost for sure.  "Angel" finds their grunged out power pop formula continuing to work , without feeling redundant.
"Shame" has a more brooding groove. The thunp of the bass lays the ground work, for everyone else to coast over . The more punk influenced theme returns on the last song , that is tempered with atmosphere and melody. there are some pretty 80s rock god solos on this album though the most memorable might be on the last song as the melody clearly works lock step with the song as a whole. This album rocks if you are into melodic grunge tinted hard rock with metal moments and not picky about vocals then this is for you, the vocals are what is keeping me with just giving this a 9.5, which is still outstanding it is just not flawless.
Posted by Wilcifer at 6:11 PM