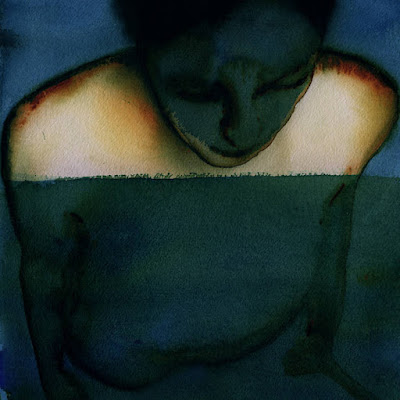 This Irish band plays a dreamy droning take on shoe gaze. The centerpiece is vocalist Katie Ball who dreamy fey vocals stylings, offer the kind of breathy narrative that gave trip hop a great deal of its atmosphere in the 90s . The band begins to come together in a more organic fashion that sounds like a band more than button pushing by the time we get to "Still" .  There is a touch of noise draped around the sonics they color the song with. " I Am You" has more of a dynamic shift and I admire the fact they are not afraid to challenge the listener with harsher almost industrial sounds.

If it was not for the intervals Katie choses this would sound darker. But even I will concede it works for what they do. She pushes from her diaphragm more and goes up higher on "Seed" which is more than can be said for the trend of pop singers like Billie Ellish who use a breathy tone and record their vocals close on the mic. "Blue Chalk" works off more of an ambient tension pulsing in the background. The vocals are haunting but feel less invested in being as crucial a part of the song. It feels like it should bring the hammer down like a HEALTH song would but that never comes.

"Early" has a more formed and floating vocal melody and goes to show the dynamic range this band has in terms of the scope of what they do. There is more melancholy buried into the fibers of "Sore". It is one of the more emotive vocals performances Ms. Ball gives thus far on this album. "Mirrors" has more motion to it and is one of the album's better songs despite being more detached emotionally. The 90s electronic alt rock vibes get stronger on "In the Shade" . It almost sounds like if a noise band remixed a Chvrches song. The percussion is more minimal on the last song and the vocals hover around with the rest of the droning atmosphere that is the focus of this song which at five and a half minutes is not long compared to some of the other music we review around here, but for this band it's their longest song at least on this album. I will give this album a 9.5, it is strong when you consider what they do which is going for a mood and they use some interesting colors to capture it. Not shoe gaze in the way you might expect them to be.