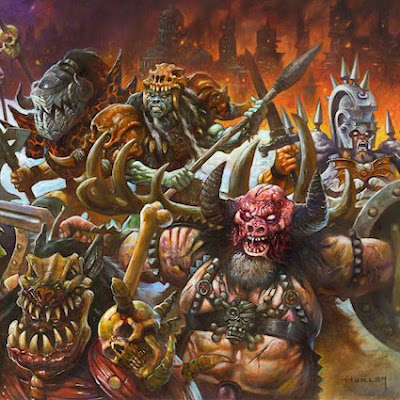 Gwar has been one of my favorite bands since high school, though it was the 1997 album Carnival of Chaos which at the time felt like a dialed in more punk effort from the band, that my interest waned. When the band came back without Oderus on their 2017 "Blood for the Gods" I became invested in again as they had a great deal to prove carrying on without their late singer. It was so impressive that this is being reviewed with this band now proving themselves going forward on their own merits as an entity unto itself. The title track that opens the album is melodic with rock sensibilities, but still aggressive enough to have been made by cosmic barbarians. If any band was going to not conform to the kinder gentler trend with metal toning it done to be politically correct, Gwar should be the band who challenges this. They push the envelope with the lyrics to "Blood Libel". While be interesting to see if the internet calls them into question for this. It is also a really good song aside from the shock value. They prove they can thrash with the best of them on "Berserker Mode" which has never been a secret since they have a long history of it.
It is not until "Motherfucking Liar" that the momentum slows into something that is more straight forward, I would not call it filler, but it is not as strong as the first three songs. The narrative of concept this album is telling in regard to their intergalactic battles seems to come together on "Unto the Breach "a slower and doomy song. It lumbers with a sludge like weight in its step. "Completely Fucked' is rocker that is rooted less in metal and more of an 80s tinged hard rock recalling bands like WASP and AC/DC.  "the Cutter" sounds like Judas Priest when you get to the chorus, if you took out the falsetto vocals of Halford. In fact it's "Turbo Lover" that is reminds me though the bulk of the song is tight in your face thrash. The more elaborate "Rise Again" shows the band more capable than I even expected as they reach beyond the pigeon hole of shock thrash.
Things get really weird on "the Beast Will Eat Itself" as the veer off into a Voivod like prog. It has angular groove and a Primus like thump. They continue to take twists and turns on "the Venom of the Platypus" , though it has more of a rock drive to it.  There songs like "Ratcatcher" that easily establish themselves alongside the band's classic songs. Some of the more rock n roll vibes of this one have a great deal in common with Alice Cooper, which makes perfect sense.  It is hard not to head bang to "Bored to Death".  The hook as a Megadeth feel, but it rocks real fucking hard so I am not complaining. "Starving Gods" gets back into a darker proggy brooding though is firmly rooted in metal. The two and a half minute intro to the last song could have been trimmed back for sure. It's drone even carries on well into the five minute mark of this almost 11 minute sprawl. even then it just jams along the lines of weird noise. Different for the band for sure. Overall however this is a really great album that is full of weird twists in directions away from what you expect from these guys while delivering the goods when it comes to what you want from a Gwar album,.
Posted by Wilcifer at 4:06 PM