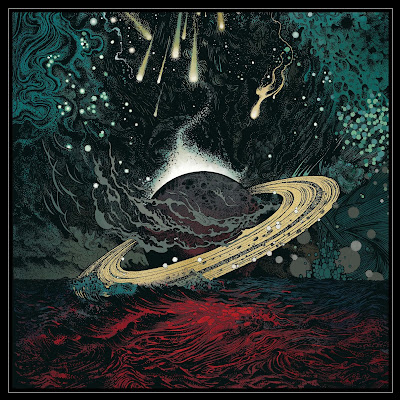 I am not expecting anything in the hard-core vein which ran through their 1998 debut as they have been moving more toward what is the middle of the road hard rocking that bans like Torche and Mastodon now occupy as well. The vocals sound like 90s Los Angeles on the second song, it's closer to Guns N Roses than Converge. By the third song it is such straight up rock n roll that it begins to become a little bland. The more melodic title track reminds me more of Mother Love Bone than post-hardcore. But it is a good song no matter than genre and I am open to that. I am also not too emotionally invested in this band so that gives them more wiggle room.

"Careless Offering" is the best song so far, it is darker and aggressive, not a step back into who they used to be , but a step in a better sonic direction.  "Blinded By A Blaze" takes a similar emotive power ballad direction as Mastodon's work in this direction. Perhaps Alice In Chains is the influence for both bands in this regard. There is some great guitar playing on it. "Amaranthine" is the first really balls to the wall song, though it feels more sludgey in its attack than hard core by how the vocals are bellowed. When weighed against the previous song it's clear heavier does not always mean better. "Searchers Of Hell" is another harder edged song with big lumbering riffs.  But it feels like something any heavier band could write. Though it does grow on me.

"Nightmare Eyes" is marginally darker and more emotive as much like the bulk of this album everything hinges on the vocals.  There are a couple atmosphere interludes which for the sake of this review I will ignore as they do not contribute anything to the album as a whole. The smooth melody on "Waiting For Love"  does make it feel like alt metal from the 90s.  "Reckoning" isa reminder that Cave- in needs to lay off the Avenged Sevenfold.  My impression about the Avenged Sevenfold fetish they have acquired has not changed when it comes to the 12 minute power ballad they end the album with. I am unsure what their longtime fan base is going to think about this album if you are not too invested in them being post-hardcore, then it might work there are some decent songs, and I appreciate what they are trying to do even at the most cock rock,     I  will give it an 8.5.

Email ThisBlogThis!Share to TwitterShare to FacebookShare to Pinterest
Labels: 8.5, alt rock, Cave- in