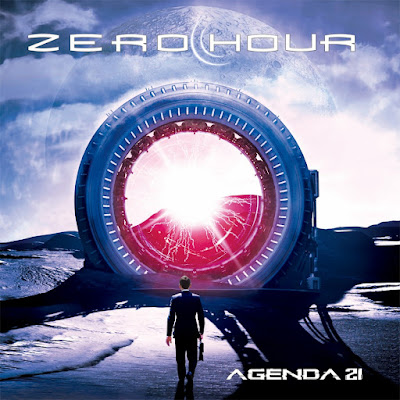 "Dark Deceiver " is the last album I paid attention to. I liked what I had heard from this band in the past so jumped at the chance to check this one out. The opening track is very well, executed in terms of the instrumentation. The vocals however despite the power metal dramatics they indulge in that owe a great deal to Dio this time around, feel a little less inspired. The 'damn you/ damn you all" part would have sounded better more aggressive. That is more aggressive than the grit that they do gain as the songs builds.  As regular readers can attest to, I prefer sung, vocals the key when working with heavier music is how to pull that off without being 80s cheese.  While I am also not a fan of having opening tracks that are over ten minutes, they do explore enough places that I never feel the song is just wandering, though it is also not the compact punch in the jaw to get your attention that most of the great metal albums have.
The groove of the second song feels more like they are back in their sweet spot even if it is not as heavy as their old stuff. "Stigmata" which is not a cover of the Ministry song, is more aggressive but less focused of a song with the guitars more obsessed with winding around each other in a dizzy finger circus of acrobatics. The song does dip back into a more Kamelot like melodic section. Which would really be a Queensryche like melodic section. The build on this song works pretty well and reins things back in. The more melodic "Momento Mori" goes even further into an emotive direction. Not a ballad, but a very subdued journey into a marginally darker place. The drummer is more impressive here where he proves he can hold back,
The title track I had to listen to a few times for it to sink in as it did not really grab me. But it is effective for what they are doing here and works as well as it should. The last song "Patient Zero" is more interesting. It is mellower and leaves more room for the vocals but works better. Three minutes in things do get proggy, but the dynamic contrast makes it work.  I will give this album a 9, it might not be their heaviest or most aggressive work to date, but it is a solid album that does prog metal better than most these days.
div>
Posted by Wilcifer at 4:45 PM