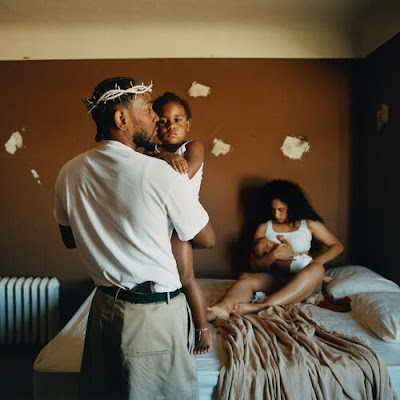 After checking out his acclaimed "To Pimp a Butterfly" , which left me less than impressed, I skipped out on his "Damn" album, which also coincided with his newfound Christianity . With this album they hype is back. There is bound to be controversy as his faith places him at odds with things like cancel culture and gives a different slant to social topics, but when it comes to reviewing album I do not listen to music for social impact, I listen to songs, so at the end of the day the question that needs to be answered is can he write good songs consistently . As long as he does not start preaching, I am willing to look past his religious leanings .
When it comes to his song writing ability he falls along the lines as most pop artists with questionable levels of talent as it takes 23 Producers and 37 songwriters to make this album, to give some perspective Pink Floyd's "Darkside of the Moon" album only had one additional songwriter outside of the band, which was the guest singer on "the Great Gig in the Sky" and 3 be assisting in engineering and mixing. You would think this assembly line of songwriters would have to make a flawless product. Not quite in fact, The first song isa rapid exclamation of lyrics, but really not substance in terms of songwriting. "N95" proves that they are capable of getting this absurd team of songwriters to crank out a song worth listening to with groove and vocals that work over said groove.
Reverse racism always get a pass in today's climate so no one will bat an eye at lyrical tone of " World Wide Steppers" . The song factory gets their shit together again for "Die Hard" . Lamar feels like a guest on his own song here. While we are talking about his talent as a rapper, my opinion that what he does Q-Tip has already done better remains intact. "Father Time" is about his daddy issues, and works as a song, not great but effective for what he does.  "Rich Spirit" is more laid back, the beat is minimal, but the song works for what they are going for.  "We Cry Together"  is Lamar is a relationship drama rapping Taylour Paige. The fact she is an actress playing a rapping here speaks to the depth of this. Once again he feels like a guest on his own song when it comes to "Purple Hearts". It is a well written song, just doesn't seem like it was written for him as Ghostface, puts on a better showing.
Not sure this needed to be a double album, but that is what we are getting for every song like "Count Me Out " that works off a smarter pop sensibility with the grace of a hip hop Frank Ocean, there is a song where the song factory tries too hard and the experimentation goes awry like the more minimal "Crown" which has a piano drone rather than bumping beat. Sure you get credit for trying, but with this much money at stake you would think the factory would think of what is effective given they are working with a rapper rather than Prince. I had never heard Kodak Black until the song 'Silent Hill". It is smart he keeps himself shrouded in controversy or someone might notice his career is based off rather flimsy talent.
The second part of this double album finds it getting mired into droning ballads and less focused.  "Saviour" is more upbeat, but less focused lyrically. "Auntie Diaries" might be about his trans aunt, but musically there is not much to it.  "Mr Morale" finds how he can take his more social focused lyrics and make them work over a futuristic beat.  "Mother I Sober" finds Beth Gibbon's guest appearance pretty much wasted on a boring drone of piano and spoke word more than rapping. Lyrically the message of letting go of event that you allow to hold you in a place in time is pretty great but that does not mean the song itself is great.  "Mirror" works better than the bulk of the songs on this album, so it is a good note for it to go out on.  I will give this album a 7, anyone who tells you it is the best album of the year, should not be trusted when it comes to music, I think if it was cut down to one album they might have had something more fun with out being dragged down from the boring drones of spoken word.
Posted by Wilcifer at 12:56 PM