Lord Vigo : "We Shall Overcome" 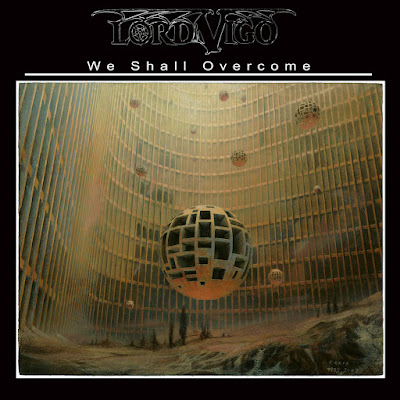 This German band feels more like power metal than doom. There is a good bit of weirdness going on here.  It is always weird for me when the drummer sings.  They gallop against the drummer vibrato heavy croon that owes a great deal to classic metal. The second finds them just as determined to gallop alongside these sword wielding riffs. There is a slight new wave warble to the vocals that is more pronounced, that almost sounds like Byran Ferry covering Iron Maiden. Not the best produced overall sound as the instruments fight for their footing in the mix. The guitar often getting lost while the vocals retain the spotlight. I think they would do better to sit further back against the guitar.

"Since the Sun Was Young:" turns into a train wreck with the bass line bouncing into the drums awkwardly, the vocals are doing their own thing and the guitar is lost in the chaotic mix. This is how not to do prog, as they are trying too hard and the arrangement becomes murky at best. They get it right on "From  Our Ashes We Will Rise" , they are also trying to do a whole lot less.  The title track is kind of awkward and clunky, but kinda works.  Though the drumming on the proggy break down is kind of suspect. Yet to hear anything that feels doomy this album is too happy for that..

I can hear where they are trying to bring darker new wave like elements into their sound, but none of this is flowing naturally,  The last song "New Dark Age" is heading in the right the direction though the execution is a little off, this whole album feels a little rushed, perhaps if they say on these songs a little long with a producer to give input the results might be more refined. I would have liked this in high school, my adult mind that consumes at least three new albums a day knows better and is going to give this album a 7, which is more than fair in fact the reason they scored so high is their willingness to be different.