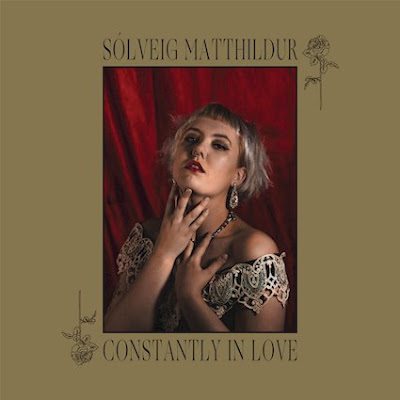 It might sound like the easy way out to compare a female singer from Iceland to Bjork. I won't leave it at Bjork, because it is like if she decided to collaborate with Zola Jesus , the results might be similar to what goes on here. It would however be Bjork's more minimalist experimental side, rather than the knack for punchy pop hooks that propelled her earlier work. The album has an odd drift as before I knew it I was five songs in. I think the song before this "Tomas" was the first to really find it's groove. The vocals float with the atmosphere, rather than locking in to create defined verses and choruses. The electronics sometimes help provide structure more than others. On "My Desperation" it feels like the vocals are doing their own thing separate from the music laying underneath them. It borders on dark wave and I can hear this appealing to fans of goth. There is almost a looser Switch Blade Symphony feel at times. "Your Desperation" is more of a shadow of a song , so I do not reengage the album as active of a listener as I could be until the pulse of  "Tomas" which as I said is the first song to find a groove, thus leading me to become more invested.

I like the darker mood the synths create on "My Father Taught Me How To Cry". While it's nicely hypnotic it's not until midway into " Constantly Heartbroken" that it bends a knee and conforms to being a song. There is more that hooks me into "Dystopian Boy" . The lyrics are easier to make out and flow better with the synth moving the song. It might be the best song on the album. Deb Demure from Drab Majesty lends their voice to the song, but it disappears in the mix. Regardless this type of thing is certainly going to appeal to fans of Drab Majesty, so that is an easy sell. "Utopian Girl" must be the call and response to the previous song. Though it is not as catchy and dances alone in it's own murk. It does gain some sonic steam as the song gradually builds to add a greater dimension of dynamics than the bulk of the album has.

There is a better balance of many of the elements that have already been in play over the course of the album. There is the moody atmosphere. There is a dreamy electronic throb and soaring vocals over it. More Zola Jesus in nature and while is tries to hypnotize more than move your body, there is enough to grab a hold of. Overall I like the picture she is painting with the sounds on this album. I am unsure really how many repeat listens I would get out of this because It would make more sense for me to listen to Zola Jesus when I am in the mood for this kind of thing. I'll give it an 8.5.