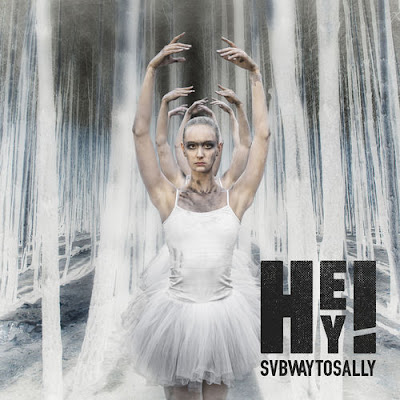 When folk metal is paired up with industrial the results are better than it might sound on paper. It counter balances the normally too happy results of most bands that delve into this. Sometimes this works better than others. While the opener is great, the second song doesn't fire as brilliantly on the same cylinders. "Konigin der kafer" is a little darker and brings them back a few steps closer to the sound I first liked. There are more electronic elements. "Messias" balances the more anthem like qualities against a simmering darker under current. The song that follows this one has more organic instrumentation, but is hopefully brooding. It paints in lighter shades of gray, while the chug of the guitar adds the tension.There is a bit of a groove to it as well. It is a little more dynamic than the other songs which might explain how it won me over..

I think this band's strength is all of the different places they can take you. When they do this with a darker touch then it is sonic magic. I think keeping the happy out is the one thing they need to focus on. This is their 13th album so they have a pretty solid formula they follow, it just doesn't adhere to what other band's use as a formula so that is why it works so well. Midway into the albums the first less than perfect moments surface and to me they are due to the fact it sounds like Ukrainian nu-metal. These are however balanced out by I guess what other bands might find more experimental , but are common place for these guys . "Alles was das Herz will" is one of their more straight forward rock moments. I guess referring to these guys as metal really depends upon how you define meta. I think regular readers here would find them to be more hard rock. This point in the album it finds them settling into more straight up rock. When it is done with a darker tone it works better for me, but the folk elements are falling by the wayside.

At just two minutes the album ends with the peppy title track. Some of the previous songs were more interesting. I think this album gets off to a good start and when they are engaging their more folk side then the songs stand out  I will round this album down to a 9, while there are some incredible songs it loses a little bit of creative steam when it settles into more middle of the road rock. But overall, it is a refreshing take on folk meeting rock.