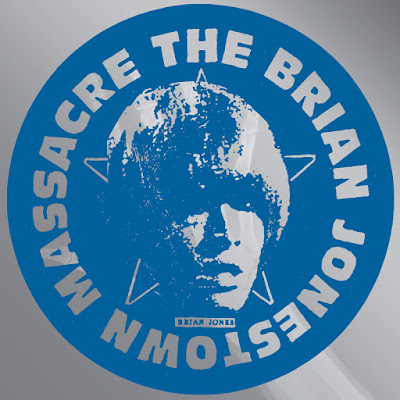 If you don't know who these guys are then this is Anton Newcombe from the Dandy Warhols. There is a moody almost post-rock feel to the strummed opener like a less goth version of the Cure. Anton makes up for what he lacks in vocal prowess with attitude. The arrangements are fairly simplistic rock n roll, darker than the Rolling Stones, but also less dangerous. Mick Jagger is never this depressed. Rather than go on any long winding roads the songs jam off a singular vibe. At times there is more of a 90s alternative vibe, which the Dandy Warhols certainly sprang out of.  Female vocals take over on the second song. This gives things a more dreamy feel. The bass player stay in motion while holding things down. "My Mind is Filled With Stuff" is a jammy instrumental that drones more than goes anywhere.

Th acoustic strum of guitar leads into the weird wonder of "A Word" which gets the whole 60s psychedelic vibe better than most bands. There is a drugged sluggishness to it despite the fact Newcombe no longer gets high. "We Never Had a Chance" falls on the more down trodden side of Brit pop. Lyrically things are bitter and bleak. "To Sad To Tell You" continues to explore the band's =more depressive side . As they rain on your parade there is some tasteful guitar and a great tone on every instrument . I prefer this to their more straight ahead rock n roll side that they indulge on " Remember Me This".

It's back to a more garage rock style strum on "What Can I Say". I suppose if the Monkees had hung out with Charles Manson, instead of the Beach Boys , they might have made this kind of music. I'll round this up to a 9 as it taps into the hazy kind of thing that the Stone Roses used to do , which I liked to get stoned to in high school.