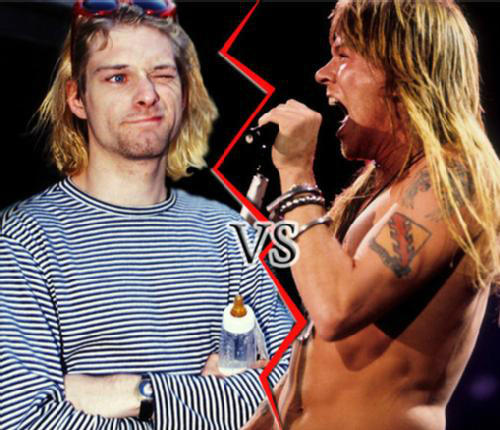 Inspired by a Facebook debate. I decided to weigh them in pound for pound to see who really had the better music of the two . The first dozen are pitting artists against their own work. Then the next dozen are artist vs artist.

So we are not looking for what was a better hit, as most radio songs are shit since they are packaged for masses which is the lowest common denominator. We are looking for which album is better. Hand's down "Nothings Shocking" wins this one. Sure there is "Three Days" for it to contend with, but "Ted, Just Admit it" and "Mountain Song" slam this one home.

Sure "Nevermind" took grunge to the masses, meaning the songs were user friendly enough for widespread radio consumption. "Bleach" has more emotion behind it and songs like "Love Buzz" , "Floyd the Barber" and "About a Girl" beat out "Smells Like Teen Spirit". They are more brooding and have more balls.

We have already covered the fact we do not care about hits, so that takes  "Rusty Cage" out of the equation, but even then there are 5 good songs on it. "Louder Than Love" is darker and has a more sensual throb to it . "Jesus Christ Pose" you say?  "Gun" is a better song.

This was tough as there are some great songs on "the Real Thing". "Angel Dust" found the band giving mainstream a middle finger and went harder and darker , so " Angel Dust" wins out.

"Pretty Hate Machine" is a great album though in more of a Depeche Mode direction. "Downward Spiral" has a more emotional heaviness to it , along with vastly better production quality and guitar sound so it wins

Are you fucking kidding me ? This is not even close. There is no need to even explain this. If you don't get it , then you don't know shit about metal.

Another one that needs little explanation. Add all the good songs on their 1991 double album and they won't be able to touch "Appetite"

This is a tough one as the 1992 album is full of raw emotion and is one of  Stipe's best performances. "Document" wins this one as it finds the band working at the peak of their power being an actual rock band rather than dripping with ballads .

I love Moz's solo work, but the Smiths made some of the best albums ever

Closer to call than "Master of Puppets " and " the Black Album". "Reign In Blood" is more of what Slayer is .

While most 70s  Ozzy Sabbath albums would win this one, Dio Sabbath dominates 90s solo Ozzy, even 80s Ozzy consistently beats out "No More Tears".

ok now artist vs artist - we are looking at the artists of note for their respected decades and pitting them against artists from a similar genre.

The battle of prog metal. Tool was once one of my favorite bands since their inception in 1990, but Iron Maiden who if we are just counting the Bruce years have stood the test of time since 1982. I sometimes get the urge to revisit Tool , they waned 4 albums in where Maiden was kicking ass well past that .

The Cure  vs Smashing Pumpkins

Moody rock for pasty white kids. Smashing Pumpkins really only had 2 solid albums under their belt, neither of which can hold a candle to "Pornography" much less "Disintegration"

Kate might have had 2 albums out by the time the 80s rolled around, but the bulk of her work is from the 80s. Tori Amos owes her entire sound to Kate Bush...end of story.

Tears For Fears vs Radiohead

After "Ok Computer" Radiohead gave the record label the middle finger and got darker and more experimental. However if we look at who has the better songs, Tears For Fears beats out the bulk of Thom Yorke's introspective whining.

Siouxsie and the Banshees vs Bjork

This one is a close call so it boils down to the prolific body consistent work and Bjork only had 3 albums that would be overwhelmed by the 7 Siouxsie put out.

The Cult vs Pearl Jam

Battling for the throne left vacant by Jim Morrison . It comes down to "Electric" and "Sonic Temple"  against "Ten " and "Vs" so Eddie Veddar and friends are going to walk away the winners here.

Drugged out arena rockers clash . This boils down to the fact the first 2 Crue albums crush anything STP  put out .

Lets not even get into who is the better singer and guitarist, that's a no brainer. Has Kravitz ever dreamed of touching "Purple Rain"...hell no.

"Every Body is Doing it So Why Don't We" is a great album and got more airplay, but it's not "Blue Bell Knoll"

Ok both are cheesy radio rock. Def Leppard's songs stick with me better.

Korn did inspire a generation of glue sniffers to tune down to b. Celtic Frost's music was ahead of it's time and continues to influence black metal . Less daddy issues and more thoughtful

the Misfits vs Green Day

Is this even up for debate ?