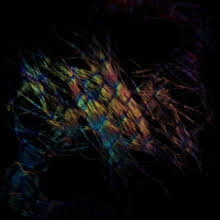 Up to this point I have always like what I have caught from this band. It had a dark density and combined post-punk moods with post-metal sounds . Here they are going in different direction. It is more lo fi. Drum machines taking the place of the bottom end their sound used to have. If you are moving in a more 80s new direction and it's not fully connecting with me their is a problem. The vocals are a little higher to create more of a Depeche Mode like sound. The guitar parts and weird and angular, with re-verb replacing distortion. It's sounds like if Bella Morta or Cruxshadows tried to become a progressive rock band. There are some redeeming aspects of what is happening here, most of those fall on the guitar playing. I think it comes across as not as dark due to the production quality and the shift in guitar tone, which works for what the guitar is doing , but perhaps not where it fall in the bigger picture they are trying to paint here. So the strength and the weakness are different sides of the same coin.

The refrain of  "The Ruins" works pretty wall, but overall the song doesn't measure up fully to what I have heard from these guys before. There is more of a Cure vibe to " No Gaurdians" , which should make this an instant winner in my book, but I feel the vocals are uncomfortable and trying to sing higher than what this guy is best at. So five songs in and I can say I am beginning to feel disappointed. "Eidolon" might be the best song so far. If I went into this not having heard this band before then I think I might be more impressed with it. There is a more Pink Floyd like guitar melody.  The parts of songs like "Basilisk" I am sure sounded great when they were tracking them, but how they all fit together in the mix is the problem. So part of the problem might lay in hos this album was produced.

The title track the album ends with is very sparse and atmospheric . They let to much sit on the shoulders of the vocals, which I am sure sounded just fine in vocal booth, but when left to sit naked atop very minimal backing , not so much. I will give this album a 7, because there are good sounds and ideas abounding. It is more of a progressive rock album than what we have heard from them in the past. So much so this might have been better served being released under the guise of a solo project under another name as the difference is as wide as the difference between the last A Perfect Circle album and "Undertow".