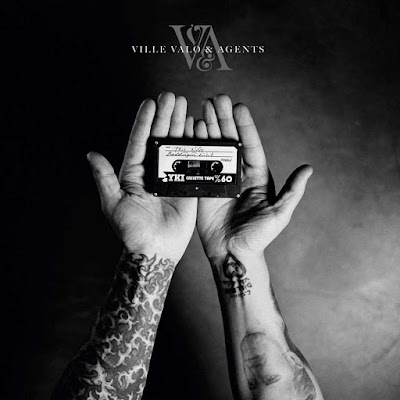 Remember when H.I.M covered "Wicked Game" ? Well that was foreshadowing. Ville is taking a stab at being Chris Isaak on this album. The Finnish version of Chris Isaak. Which oddly also involves little yodeling. It is not huge on the Elvis influence. The guitars have that weird mix of western rock a billy and surf rock that Chris Isaak has used. The 3rd song is one of the more Isaak leaning. Ville's vocal style is very smooth and almost bears no resemblance to to his darker goth rock days. Gone are the romantic satanic images. I know if you were listening to him back in the Myspace days or have a heartagram tattoo, then you are probaly wondering what even makes this album worthwhile.

To answer that it is going to require a few things from you the first being a very open mind. The second an appreciation for guitar. If you are really into guitar and not in the shreddy way, then you can appreciate the great tone captured here and tasteful playing. The pace picks up a little on "Paratiisi" but it hovers very close to the established zip code of the sound they are going for. There are some weird awkward moments that stray from the formula . "Rockin With Enzio" being one of those. It sounds like it is from a kids show on Telemundo. There are moments when the Spanish influence on Western music comes across more gracefully. The songs are more flowing than ballads , but not actually rock music. He also sings in his native tongue. Which works for growling metal, but might baffle the Myspace kids.

There are some instrumental interludes that I am not counting for the purpose of this review. While not dark as in goth there are some moody moments. There are some upbeat moments which feel like 1940s French pop music. These happier notes sound like Frosty the Snow man to me and do not sit as well. There are flirtations with rock music with songs like "Ma haluan sun" . The cadence of his vocals going down towards his more baritone range feels even more like Chris Isaak. There is more twang to "I Told You So" . It also finds him singing in English again. He still does it smoothly , it is however more country than what you are used to from him. It closes on a note similar to what we have already heard on this album. I'll give this album an 8. It is good for what it is , the weird thing is getting used to what this is when you perhaps expect something else.