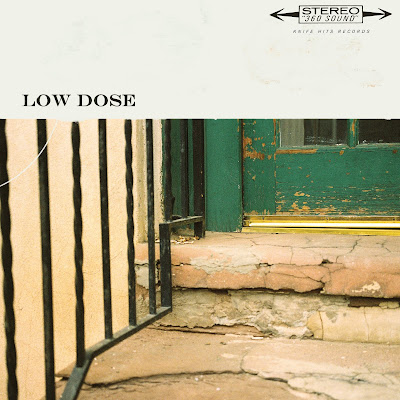 The guys from Fight Amp have formed a new band with singer , guitarist Itarya Rosenberg, that owes more to 90s alternative than pumped up noise rock. Not that some of the more pounding angular bit are not there, along with punk influences, but they have more in common with L7 thanks to Rosenberg. In some ways they are like a more sinewy and Jesus Lizard like version of Brutus, that I just reviewed. "For Sure" has a catchy grunge feel not unlike Hole, but with a dash punk. The thing they have most in common with Fight Amp is the burly bass sound.  Male vocals come in on the song "Otherwordly Motives", this gives them a more late 90s post- hard core sound.

"Sinking" finds the male and female vocals trading off. It works off of pre-established dynamics, we have heard , so nothing new is introduced here. I think these similar sounds are put ot better use on "Song 12" and done so in a more punchy fashion. The males vocals occupy more of the spot light on "Not Break Skin", when her vocals join in then it has stronger feel with them in unison. She is the stronger singer by far so it seems like a waste to not use her .

The album closes with "the Legendary Divorce" which was the name of her old band with her abusive alcoholic ex-husband which is the song about.  Itarya had a rough go of life while recording this album so I imagine the lyrics to most of these songs elude to that , though even here they are draped in metaphor  while there are some exceptions most of the story is not spelled out for you. "the Legendary Divorce" it is carried by a wandering bass line so it marries indie rock with grunge. I'll give this album an 9.5 , I really enjoyed it and think it will continue to grow on me. It is being released on Brutal Panda.