Louise Lemon : "A Broken Heart is an Open Heart" 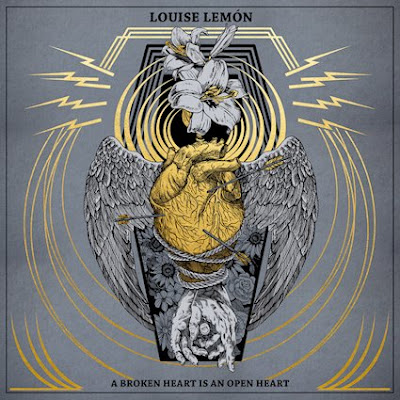 Have had a pretty varied month so far, so it makes sense to check this album out. I am not sure how this is called doom pop, as it is not any darker than Zola Jesus. It does have a more soulful pop vocal performance as she packs a good deal of power when she belts it out. Musically it has a big Vegas lounge feel. It is not until "Blurry Vision" that things take on a more distinct sound. Then it's back in Adelle's zip code for "Swimming In Sadness" . At this point I begin to get bored. I like Taylor Swift and other pop music, so when I hear doom pop then that should be in my wheel house. It is not until "Susceptible Soul" that I hear any traces of anything that could be thought of as doom. There is a darker bluesy tone to this song and some great guitar playing.

"Cross" has a very soulful 70s sound, which is not dark, but it is a good song. Nothing doom here and at this point I have almost gotten that out of my head. "Honest Heart" is pretty steamy and the album seems to be improving the deeper I get into it. Is it the most original thing I have heard? No , but it works for her voice. I like when she doubles her self. I think some harmony parts could have been interesting. It's a silly song title , but "Almond Milk" gets better as it goes. At first I did not pay as much attention to it , because her voice begins to take a uniform approach to these songs. There is more gospel than blues as the Hammond organ purrs under the swell of the song . It almost goes into more a Pink Floyd sound.

The album ends with the title track. It is a stripped down piano ballad. There are echoes of guitar in the corners. The vocal melody is rather loose and she seems to just be vocalizing rather than really giving anything to latch onto. Sure she has a good voice, but it is about where you put your voice against the other instrumentation. I'll round this one down to a 7.5. It has some strong moments, but it leaves me kinda lukewarm.