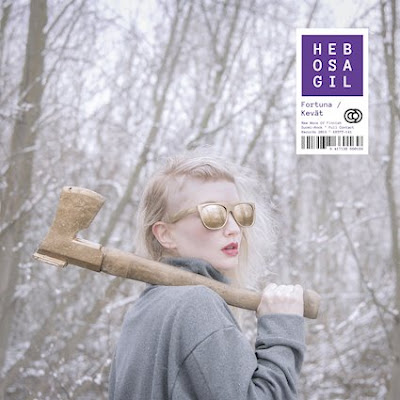 Some times it pays off to take a chance and check out a band you know nothing about. It's not often that I am thrown a curve ball like I was with this album. That is saying a great deal as I knew nothing about these guys going into this one. It was a happy surprise.  This album is two eps that were slapped, together , but for all I care that makes this a new album, since I have not heard it before. This band from Finland is really interesting and hard to pin down stylistically. They are punky indie rock in the same way Iceage is now punky indie rock. Their shit has a sonic drone to it that I like. I would not call it noise rock , because it is not that Big Black kind of abrasion that all the Amp Rep bands try to copy. It is very melodic and musical without being overtly accessible.

The second song simmers til midway through for them to finally get going. The guitar tone is jangly and clean with only distortion around the edges when it builds up and the vocals get more throaty. I t sounds like these guys would be fun live. They are moody and somber though not quiet dark. The third song has female vocals . It works of a formula similar to the song before it. Though it is more brooding and heavier yet more trippy when it builds up. I think I could appreciate this more if I were still smoking pot, but as is , this album is still cool. It is well produced though every raw and organic.

There are interesting guitar tones and I like the groove of the last song. The guitar warbles and echoes in a simple yet compelling chord progression. Of the male vocals on this album, which are two of the other three songs. I think these are sung the best.They get into a more throaty yell as the song builds up. It has more brawn than what you typically thinking of when it comes to indie rock, but I guess it is way past time for indie rock to actually rock. I'll give this album a 9.5 , it is excellent even though the songs don't conform to the most catchy brand of easy listening. If you want some indie rock that is rough in all the right places between your ears then do your self a favor and check these guys out.  This album comes out April 5th on Ektro Records.