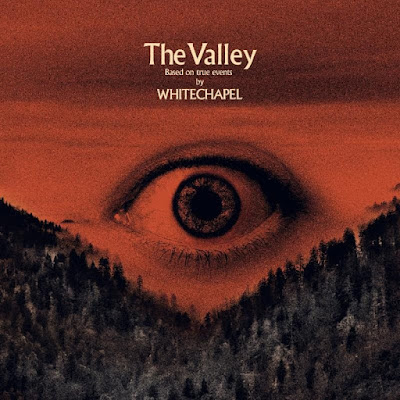 I have always thought of these guys as off shoots of Myspace metal. I know they get labelled metal core or death core, but they always have seemed just to be low tuned breakdown oriented death, which owes as much to nu-metal as nu-metal did hard core. Even more so when a song like "Hickory Creek" sounds like one of Slipknot's power ballads. Throw this against the song "Brimstone" which is pretty much just groove oriented death metal. This album is well produced. They are on the better side of decent when it comes to being guitarists. They are paying the rent doing this so the bar is held higher than your average Guitar Center weekend shredder.

Groove is clearly in the heart of most of these songs. The vocals are the most brutal aspect of a song like "Black Bear" which in this day and age just seems middle of the road. It's obviously metal, but more mainstream than not. At times it seems like they asked the producer to dial in Meshuggah's guitar tone. Though rather than play tricky time signature that have an angular groove , it's your run of the mill up tempo metal riff. Midway into the album the filler sets in. There the more cliche  break down tempos, but unlike the better hardcore lack the dynamic build, at times opting more for a nu-metal shift. The more I listen to these guys the more convinced I am that this is nu-metal. Perhaps the sub-genre has been that way all along.

There is more of a Slayer chug to "the Other Side". It's one of the album's better songs if not the best. We are slipping back into the knotty zone with "Third Depth" though if I am going be 100 percent spot on the clean vocals are more like the band Flaw. It's ok, nothing ground breaking. "Doom Woods" is more interesting than "Lovelace". It at least starts off with more of a throb , then just descending into what every other metal band is doing. This is well done so I will give it an 8, which is much higher than what I thought I would be giving these guys going into this. It is not Album of the Year material, but a more mature effort even if metal core is the new way to say nu-metal.