Looking Back in Anger at Motley Crue's "Dr Feelgood" 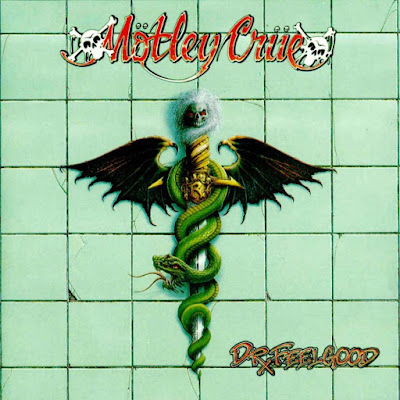 It was three songs into this album I began to consider the fact that this album might in fact be worse than "Theater of Pain". In 1989 the hair metal thing had hit it's ceiling. They needed to take heed of Guns N Roses, and find away to stand out from the pack. The title track made a decent stab of that even if the chorus was too happy. Going into the rest of the album, over production was one of this album's most glaring problems. "Slice of Your Pie" and "Rattle Snake Shake' are so stupid it's silly, the latter has too many horns and keyboards . Another problem with this album is how they seemed to pile on layers of sounds that did not add to the songs. They redeem themselves with the other break out single from the album "Kick Start My Heart". it shows their song writing skills were not totally flushed down the toilet.

Then come the power ballads. A trade mark selling point for these bands at this point in time. Vince's voice does sound good and as far as these kind of things goes, it might take too many cues from Aerosmith, but is not totally worthless. "Same ol' Situation" might work for strip clubs , but is no "Girls, Girls, Girls" which they are trying to replicate here. The chorus is like Poison and too happy. They had given up all aspirations of being metal at this point and are just making rock n roll. For some dope shooters I can't imagine shooting dope to something this happy. Perhaps they tenuous sobriety had thrown off their creative spark.  "She Goes Down" is a better song than "Sticky Sweet". I think at this point you can just bank on the chorus to every song sucking.

"Don't Go Away Mad" is almost too much like "Sweet Child of Mine". The strummed guitars are kinda going for a Cheap Trick thing and I like the vocal harmonies on the verses. This song is better written than most on this album. "Time for Change" and a shitty way to end an album. I will round this one down to a 6. So yes it is worse than "Theater Of Pain". This sounds like a totally different band than the guys who made "Shout at the Devil"