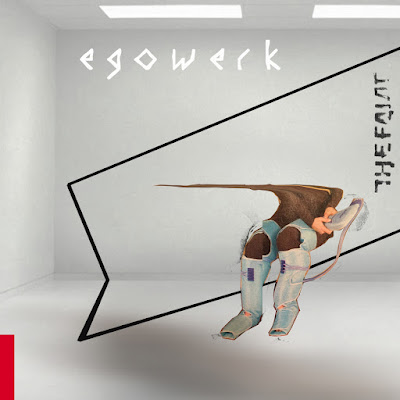 The bar is high for these guys  since they have made some of my favorite albums. ,the first thing that strikes me is how this sounds less like a rock band playing electronic instruments and more like an EDM records. A more aggressive beat drops midway into the song. It almost sounds more like something my girl friend would listen to rather than the band who made "Danse Macabre" and "Wet From Birth".  Once called electro punk, now the punk is out of the equation. The vocals are not a central part of the song either. When it comes to electronic music I like it better than most of the MGMTS out there , but I was beginning to think this drastic change was phasing out song structure altogether . This is cleared up on "Chameleon Nights". The vocals conform to the fact that these guys are making songs. There is a futuristic plastic to their sound that is more pronounced here.

The more biting social commentary that I have always liked about their lyrics surfaces on "Life's A Joke". "Alien Angel" is much more in line with what you expect when you think of this band. The beat is more of a robotic funk on the title track. It works and makes the song  coldly angular. The subtle chorus is a nice touch. "Own My Eyes" is one of the album's best songs as it is a little darker and more sardonic lyrically.  "Source of the Sun " is coolly detached, but all the moving pieces create a groove well. I like the effects on his vocals on "Another World" . "Quench the Flame" moves into a more upbeat direction. The vocals still keep things centered. The layered synths here don't have the same sense of ugency as when the album is firing on all cylinders. A case of where it is by no means a bad song it just doesn't have then same sense of urgency.

The title "Young & Realistic" makes me think the irony is coming on thick. It is more of a disco pulse moving the song. It's a well made mockery of that sound.  Though while smooth and efficient it doesn't have the bite they used to. Everything after "Wet From Birth" has owed a great deal more to Gary Numan. "Automaton" highlights like facts, in the synths even more than the vocals . I'll round this one up to a 9. Despite the stylistic shift into a more electronic direction , they key ingredients still make these guys more than worthwhile.