Looking Back In Anger at Motley Crue's "Too Fast For Love" 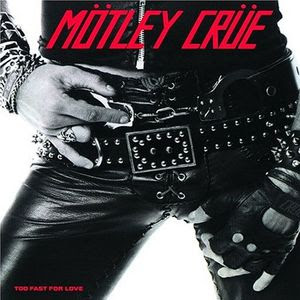 We have already looked at two of the less glorious albums of the 80s . Now here is their debut full length. I am listening to the remastered version. If you know this album then you know it opens with one of the best songs ever written...which is "Live Wire". "Come On and Dance" is lyrically silly when it gets to the chorus. There is more cowbell. Riff wise it is cooler than "Public Enemy" that doesn't feel like it has held up over the years as well as well "Live Wire". Even though it's there first power ballad in "Merry Go Round".  "Take me to the Top" has the early punk attitude with enough of Mick's mean flashy guitar style and the verse riff is pretty ass kicking. Vince hit's some great falsetto accent notes through out this record this being one of the song's that stand out. However I think it is the guitar that makes this one.

"Piece of Your Action" highlights the fact that this is a very sex driven album. I like when Vince goes into a lower register on the verses. It gives the song more dynamics. Another song that drips with sex is "Starry Eyes" , I think this one is under rated and stands shoulder to shoulder with "Live Wire". The bass has more of a presence on this song. I think it is weird how on the original mix of the album the bass is buried amid the drums and the bass player was the main song writer, The title track is also a classic but doesn't make the bar set by the opener like "Starry Eyes" does, which I would put in my top 10 Motley Crue songs. I think what holds the title track back a little back is at times the vocals come across a little silly. T

The album ends with another power ballad, which I like better than say "Home Sweet Home" due to that fact it's a darker and feels more street wise. I'll round this album up to a 9.5 as I sure the hell played it endlessly as a kid so some of the songs I might be burned out on. There is a juvenile feel to some of the songs, but I think that is the point. Plus they were pretty young when they made this so it's still stands taller than 90 percent of other glam metal albums .