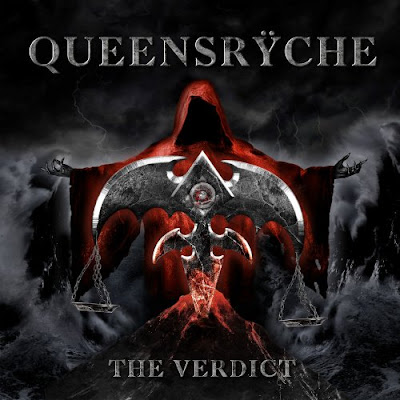 Queensryche used to be one of my favorite bands. So much so I considered getting the logo tattooed on my wrist before it turned into a shit show. I was hard-core as I hung with them even into "American Soldier". When they split with Geoff Tate they lost me. I think even here it's proof that you can have someone who can hit all the notes that Tate could in his prime, but he doesn't put them in the same places with the same sense of theater, because well...he is not Geoff Tate. This might be there 3rd album with this guy, I know it's bad journalism to not know, but I do not give a fuck, because they were dead to me during this time. So I have a great deal of baggage I am having to put aside in order to give this album a shot.

t makes sense that the former Kamelot drummer would be playing with them on tour. The singer Todd La Torre, who got his start as a drummer plays on the album. But this begs the question what the fuck is the point without Scott Rockenfield. This is just Eddie Jackson and Micheal Wilton, trying to pass off originals as a Queensyrche cover band. La Torre who I was first very resistant to , does an admirable job of a Geoff Tate impersonation. I think what sells me more is he sounds more like a mix of "Operation Mindcrime" Tate with a side order of "Rage For Order" era. From a songwriting perspective it's all on the vocals as the other keystones of their sound are kinda dialed in. What this does have going for it is this is more metal than the later Tate albums. They experiment along the lines of what they did post-"Empire" on "Inside Out" . Speaking of "Empire" there is hint of that album on the song "Propaganda Fashion".

"Dark Reverie" is the first song where I think ...Ok this is Queensryche for real. So I am going to need more of these moments. It's not that this is a rocker in fact it's more of a power ballad , but all the marks they need to hit are there. There is a darker "Rage For Order" like tone to " Bent". This comes closer to sounding like them, until they speed and try to be heavier than it sounds like they comfortable. La Torre begins to remind me a little of Warrel Dane in a few places . "Inner Unrest" sounds like uninspired run of the mill power metal. "Launder the Conscience " is more of the same. It's not unlike the more ballad like "Portrait" that inspiration returns. They seem to do better on the power ballads. I'll give this album an 8 , it's better than I hoped for, but only marginally Queensryche, but the impersonation might fool you.