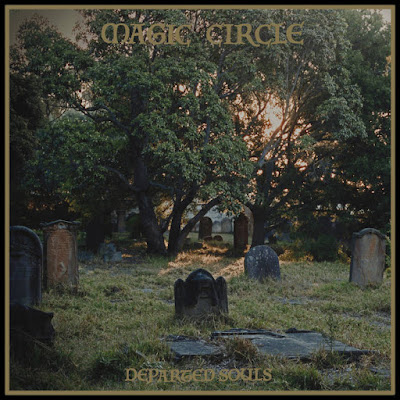 This band is referred to as true doom, but they are more of a stoner metal thing, leaning heavily on Black Sabbath influence. I can also hear some Trouble in what they do as well. They opener is more straight up mid tempo metal. There is no pervading sense of loss , despair or darkness so it is hard to call it doom. In fact it's rather upbeat. The singer's voice is decent. He has a throaty tenor. Not as smooth as say the singer of Pallbearer. They have more of a retro thing going than Pallbearer. "I've Found My Way to Die" proves that they own copies of "Vol. 4". There is a little more of a NWOBHM chug on the verse. I like when he goes into a slightly lower singing voice. on the chorus. "Valley of the Lepers" sounds like they are finding themselves rather than relying on their influences. It's more deliberate, and gives everyone the space to shine.

His voice sounds much better on "A Day Will Dawn Without Nightmares" . Though the song itself reminds me of Jake E Lee's old band Badlands. Perhaps there is a bluesy under current. It works better than the more upbeat tempo of "Nightland" , the song's more melodic second half proves stronger. The keyboards set up the more commanding tone of "Gone Again". The vocals sound great here and it finds the band, set in it's retro stoner sound , but making the most of it. There is a slight nod toward Dio in vocals . They continue to grow more soulful as the album progresses. I can hear how they are going for more of a Deep Purple direction here with the keyboard solos.

He takes on an almost AC/DC like grit to his voice going into "Hypnotized" . It does get more melodic as the song progresses . The layers of guitar help with this. These guys were better than expected and if you are into the retro/ proto metal sound, you will dig this. I am going to round it down to a 8.5 as I don't think I will get much in the way of repeat listens to this . 20 Buck Spin is releasing this.