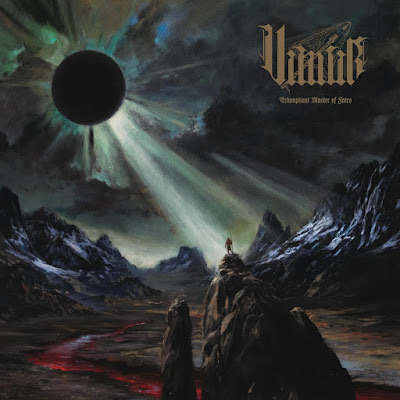 After covering an entire month of black metal for February, you might think I would be sick of it. Sick of it is a stronger sentiment, there are just albums released from other genres I put on the back burner and I am now trying to check out. This one however made me curious.  Atlanta has always been behind the ball when it comes to black metal. New York is the first city in America that I think of when it comes to the genre. Death metal and thrash make more sense when you think of at Atlanta as it has deeper roots in punk rock, so when metal became cool again  15 years ago, then the band wagon gained speed. This is more black metal than the last album which was more blackened death metal. They don't get throw blast beats at you, but also carry some weighty chugs. When they do come barreling at you full bore, it's not their strongest moment. Not that they can't play their instruments, but it loses personality. When they relish the more moody aspects of their chord progressions then their sound has more of it's own voice. It loses that when they stumbled over the momentum of their blast beats. The double bass is pretty impressive when it come in flurries.

It is the more nuanced riffs that have a better chance of winning me over . When they attack you with more tension in their gallop it works much better. At times they do devolve into using speed as the primary weapon in their arsenal, but the more melodic interludes balance this out to some extent. There is a bigger more epic death metal thrashing to "Nuclear Desecration" . It drives hook you in, and even though I typically prefer black metal, this feels like a more fully realized version of who they are. "Our Dearest Hopes Lie Buried Here" has a more gray coat of doom tinged gloom to the more deliberate pacing. This gives the song room to breathe and might be one of the best songs on this album for that very reason.

The 12 minute closing song begins with blast beats and I think "This is going to be a very long 12 minutes because how the hell are they going to keep this up?" They don't . After two and a half minutes they relent into more of a gallop. The more interesting sections of the song become book ended by these temper tantrums of blast beats.  I'll give this album a 9. Its a more matured effort for this band and finally finds them finding the darkness. It's the moment where this darkness has room to shimmer that is what gives this album it's own unique place.