Looking Back In Anger at Motley Crue's "Theater of Pain" 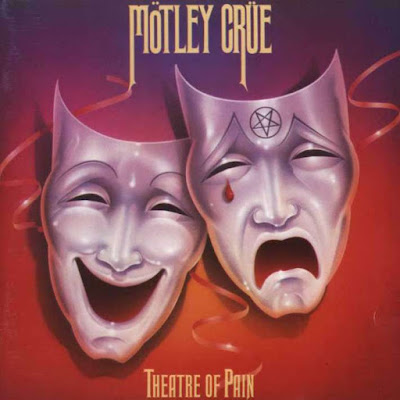 I thought about reviewing "Shout at the Devil" and perhaps I might, but I am sure that is a flawless album without having to listen. This album faced the impossible task of following that one up. In fact at 7 years old I was faced with what a band selling looked like. At 7 I knew in my gut something was wrong here and they seemed more like Aerosmith. Giving this listen this a listen as an adult is this album as bad as I thought it was. "City Boy Blues" does have a good sleazy groove to it. It is not as heavy as anything on 'Shout at the Devil" and as far a my memory recalls going into this only one song on here is. It noted that Vince's voice is ragged out her probably from drinking and touring, as he can not go into the higher falsetto to hit the yodeling notes. At 7 "Smokin In the Boys Room " felt kinda cool, though I did not know it was a cover and originally written by the Brownsville Station in 1973. They did a decent job with it and it feels like Motley Crue.

"Louder Than Hell" is the only song that sounds like the band that wrote "Shout at the Devil". It fucking rocks, even though the guitars have more of a melodic touch to them . Vince also hits the note on the word loud coming out of the chorus, which I like just as much as an adult as I did at 7. What stayed the same when this albums is more rock n roll where there previous work in metal is they still retain a sense of danger. This can be felt on the verses of " Keep Your Eye On the Money". The lyrics are stupid and the chorus is full of cheese.  The piano line to "Home Sweet Home" is memorable. Vince's vocal line makes the song memorable, but I still hold to the fact this would be a great song for Journey and some pussy ass shit from Motley Crue. The only redeeming factor is Mick Mars' guitar solo, which is one of his best.

I forgot they get heavier again on "Tonight ( We Need a Lover) . You can hear Nikki Sixx's bass better on this song, though I am listening to the 2003 remaster of this album, so that might have helped. I like this song. They speed up for "Use it or Lose It" . This song is stupider than I remember. I do like the bridge going into the chorus. From this point on the album begins to go down hill. "Save Our Souls" might be better than the previous song, but doesn't measure up to what they are capable of. The acoustic guitar on "Raise Your Hands to Rock" took things in a more Mellancamp direction. The chorus is awkward coming out of this part. "Fight For Your Rights" finds the lyrics getting stupider. The synths going into the chorus are the kind of 80s cheese ball shit that made them loose their way. This might be the worst song on the album.

I will round this album down to a 7. Which going from a 10 to a 7 certainly makes this a let down. The cup half full thought would be 70 percent of this album works. It's the other 30 percent that finds them beginning to fall from grace. While they would try to excuse this in the movie by the band being fucked up, I think being fucked up should equate pretty quality stuff think about "Physical Graffiti" . I am pretty sure "Girls , Girls , Girls " was better than this. " Dr. Feelgood" might be on par, I guess there is one way to find out.