Haunt : "If Icarus Could Fly" 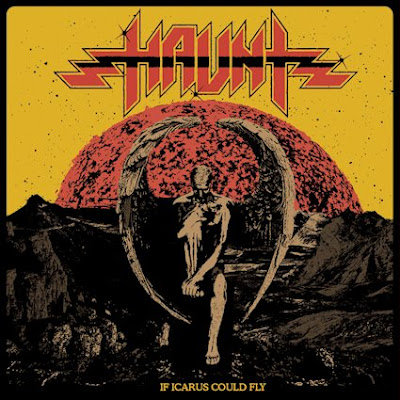 I like Beastmaker, but I also grew up in the 80s when this kind of metal was big. So I have a mixed relationship with this sort of thing as I was already listening to Judas Priest and Iron Maiden in 1983. The first song starts off a little heavy on the guitar solos. The chorus is a little happy. Church's vocal is more in the Diamond Head range, perhaps a little lower and more laid back. The guitar harmonies feel more Priest than Maiden to me. His voice is not aggressive, so it gives a mellow vibe atop this. If you are smoking a bunch of pot you may not even notice. There is no shortage of guitar solos on the album. The speed picks up to a proto-thrash on "Cosmic Kiss". Even then things are beginning to take on a uniform sound. It's almost like a more upbeat version of In Solitude. This is even more apparent on "Ghosts". Though there is more of a melodic nuance on this one.

"Clarion" drifts into a more cut and paste metal homage. Thanks to the smooth vocal  this steers clear of being power metal. There is a more epic gallop feel to "Winds of Destiny". The vocals are super layered on the chorus. It's like the Scorpions heavier moments. All the songs are under the four and a half minute mark. The guitar solos keep multiplying. The title track benefits from a strong vocal melody to balance the reoccurring guitar harmonies and solos that are all now running together.

The last  song sound more like solo. Obviously Ozzy's knack for vocal lines is a few tiers higher, but these guys are making a pretty decent stab at it. The solos are more Jake E Lee, than Randy Rhodes. I like more than the first album, or at least of what I remember of the first album. Prefer Beastmaker , since they are darker and a form of metal I lean into more as an adult. This is shit that I listened to more as a kid. Though Iron Maiden does stay in regular rotation. I'll give this a 9, it's very well done and the album sounds great. This comes out on Shadow Kingdom Records May 17th.