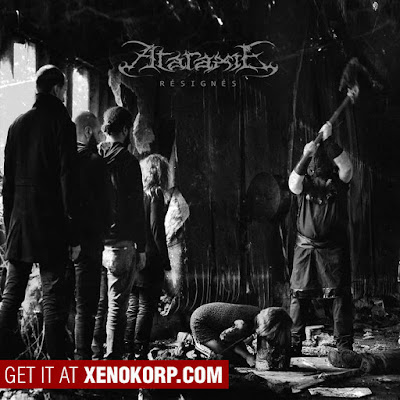 Almost more on the death doom side of funeral doom. This French band works best when allowing things room to breathe in the despair. I am in a little bit of a low swing myself as I am listening to this album so not sure how that will influence my ears. I know I am not the biggest fan of opening an album with a 21 minute song. But I have not been counting the clock to see how much fat could have been trimmed so I suppose that is a good sign. It's eleven and a half minutes into it before I start looking at the time, which also plays into their favor. The entire album is long songs, so it's not going to get a ton of plays from me . The title track that follows the opener is almost 18 minutes. The vocals are low roar with fair amount of torment behind them. It is at times more blackened doom, than pure doom as the pace picks up. It slow back down and is dense and heavy but just doesn't feel as inspired as the first song.

The clean guitar tones going into "Coronation of the Leeches " is more interesting in the wake of the distortion on pounding volume you hit you with leading up to this. About three and a half minutes in the heavy returns , but with some traces of the more melodic moments they just touched on. In 19 minutes they have plenty of time to cover plenty of ground and get blasty and doomy all in the same song with a cool punchy riff that stomps your head in between the two. The song also could have stopped at the 16 minute mark and I do not think any one would have noticed. Of course for the last song they have to have one that is even longer so they go for a 25 minute marathon. I understand that for doom when you are playing slower it takes more time to get to the finish line. Kinda like fucking an old man, but I have heard plenty of bands do more in a more compressed amount of time. Even doom bands.

I have shit to do, so I break it up into 3 to 5 minutes chunks of listening to this one. I can review an entire album from another band in the same time it takes to make it through this song. At the four minute mark it seems the drummer wants to speed up while everyone else is content at the current speed. They do get on board with building momentum in a more blackened direction. When it slows down and gets more atmospheric , things take on a more convincing emotional current.There are many moments of sonic heaviness coated in shadow, but it's the 12 minute mark before things really moved past sludged out  walls of distortion and become interesting musically. The question then becomes is it interesting enough to keep my attention for 25 minutes. Not really. Though overall the death doom sounds they conjure lean enough toward doom to work for me.  I will round this down to a 7.5 , as the lengthy songs get tiresome, but some people are into that sort of thing.