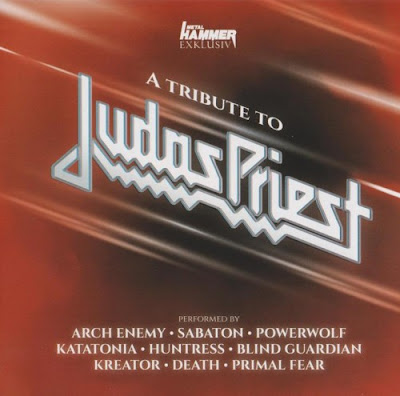 Judas Priest was one of my favorite bands growing up. I might not listen to them as much as I used to, but it always brings a smile to my face when I hear them, so I am not only very familiar with their body of work , but have a deep respect for it. Metal Hammer complied this album of previously recorded covers. Covering Judas Priest first and foremost in my mind requires a solid vocal performance. You don't have to hit all the notes Rob Halford does as there not not a ton of singers who can do that. But you need to convey where he was going with it and tell the same story. So I know this is going to be problematic.  This album  opens with Arch Enemy's cover of "Breaking the Law" . This gets a more "Painkiller" treatment. The verse riff is so iconic that trying to add extra chugs in it is self defeating. Here the problem with the vocals that I predicted wastes no time coming true. Just growling through not matter how nuanced the growl is only works on the chorus of this song. There are still enough trademark to recognize it. A power metal band like Sabaton, certainly seems more capable of handling "All Guns Blazing" . There higher register vocals, they are more of a choked AC/DC nature, but at least they are trying. Power Wolf's cover of "Night Crawler" even with the help of sung vocals comes across a little stiff .

I love Katatonia, so was eager to hear how they did  "Night Comes Down".  This one is off of "Defenders of the Faith" not one of their strongest songs, it's more of a power ballad so it works for these guys. Granted his range doesn't reach beyond what Jonas normally does. Huntress does just fine with "Running Wild" which is a safer picker than "Beyond the Realms of Death" which Blind Guardian takes on. I guess I have never given these guys a fair shot as he does a great job with the more baritone croon. The higher notes at the chorus are more snarled like Ice Earth or even Blackie Lawless.  Kreator does a much better job with "Grinder" than I expected. They should the kind of restraint and served the song like Arch Enemy could have stood to have done a better job of.

Death's cover of "Painkiller" is taken from their 1998 album "the Sound of Perseverance" . I am pretty impressed with Chuck's vocals. Even though it's a scratchier tone he hits the notes. It also has him singing in clean voice on parts. Drummer Richard Christy who also played with Iced Earth nails his parts to the wall. Primal Fear covering "Metal Gods" is pretty much a no-brainer cus they are almost a Judas Priest cover band. I'll give this album a 8.5 . Granted these bands all benefited from having excellent source material to work off of.