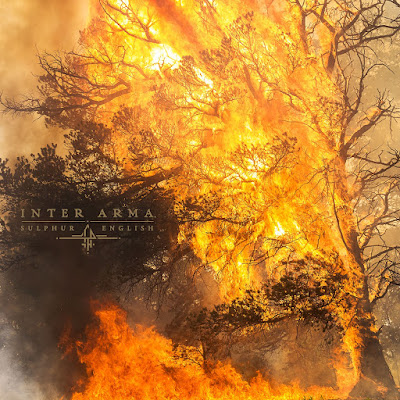 This is one of two album I was actually looking forward to hearing from Brooklyn Vegan's most recent list of the so called metal albums hipsters are waiting on this year. It opens with a darker and more abrasive tone than what they did on their last album that saw the band going in more melodic direction, This one has a denser sludge grit against a more death metal feel. They have shed any comparisons to Neurosis and are now churning out a more aggressive for of unrelenting dark thanks to  the drumming which is more focused on  a rawer double bass attack. Many band's will say they are going to get heavier this time around, but it is happening here. There vocals shift from a death growl to a nastier snarl in the latter half of " A Waxen Sea".

"Citadel" has a much more Morbid Angel feel . They are good at this brand of death metal but it is like the old meme that says "Always be yourself , unless you can be Batman than always be Bat man" . With a song like "Howling Lands" that is much more interesting than coping Morbid Angel, they should just be themselves. "Howling Lands" is aided by a higher more disgusted sounding snarl to the vocals , as well as sung vocals. Then things get darkly melodic, almost like Swans. Which if you know my tastes you know I am going to like this. It build from the neo-folk into something with a more sludge like heaviness, while retaining the sung vocals .The 12 minute "Atavist's Meridian" is the most sprawling song. Oddly angular grind that winds around into a mix of atmosphere and sonic density. The they are back on a more Swans like vibe with "Blood on the Lupines". I like how it is the more melodic moments of this album that are the darkest.

A steady flow of double bass returns on the title track. The vocals dip back down into a more guttural death metal growl. I can appreciate the increased intensity they are playing with, but don't think they are really bringing fresh blood to this death metal formula that could very well be Ulcerate, even with the more atmospheric touches that haunt the edges of the song. I do think this album is a success, but it is clear the more death metal direction is not where it's true strength lies. I will give it an 8.5 because it is so well done and the melodic moments really rise to the occasion. When they are aligned with their true selves this is unstoppable and when they are not , it's still well done , just misses the mark of true inspiration.