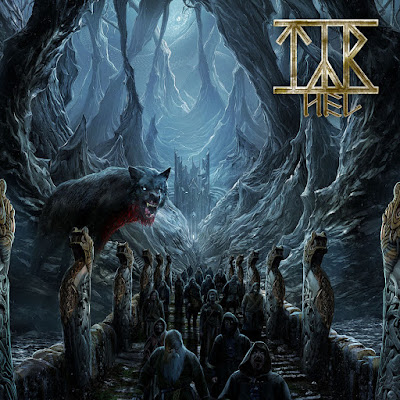 Up until this point "By the Light Of the Northern Star" was my favorite album by these guys. It had the kind of muscle many folk metal bands lack with great sense for hooky anthems . A darker heavier tone haunts the opening track. The vocals are almost more of a throaty death metal roar before they chorus finds the returning to the brawny singing that feels more like their trademark. While the melodies have more of the folk frolic to them, they are sung with balls. This is what sets  Tyr apart. One thing I like about this album is how the bass has more of a presence in the mix. This gives the over all sound a more commanding Iron Maiden like punch in their attack. Unlike Maiden this is not used to gallop, but more of a thrash chug...think Anthrax here.

This time around the song structure is more complex and nuanced. The guitar sound huge no matter what path the song winds around. It is more progressive than most of the so called progressive metal bands who are really wanking. These guys are certainly capable of delivering guitar solos sprinkled with shred, but in a more tasteful manner. Though I can here trace influences of "Black Album" era Metallica , I really like the melody to "Garmr".  They cross many genres as their are elements of power metal along the way, but I think thrash is the next dominant element. Even when they touch on their more melodic side with songs like "Sunset Shore". If it was one any other way it would have too much of the power metal like cheese. There is more of rock n roll feel to the otherwise thrashing "Down Hill Drunk" which is a little more straight forward and doesn't stand out as much as the previous songs. They come back stronger with  the powerful "Empire of the North". The guitar harmonies become more common and they begin to lock into more of a formula at this juncture in the album.

They incorporate many elements of classic metal on "King of Time" while retaining the big viking drinking song style of delivery. There is a more Judas Priest style of riffing on "Fire and Flame". The song slows to a more deliberate pace when the vocals come in, which is a welcome change of pace. Things speed up and fall into more typical heavy metal once we get to the solo section. The same could be said of the guitar harmonies going into "Against the Gods". The vocals are really the main thing that set this song apart. Despite getting off to a rough start with the Dragon Force like intro "Songs of War" turns out to be pretty decent. The last song is ok, but not ground breaking and doesn't give that much of dynamic shift from what they have already covered on this album. I will give this one a 9.5 as it's one of the most solid straight up metal albums I have heard so far this year.