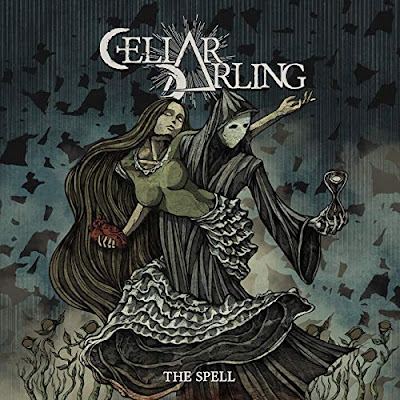 Anna Murphy from Eluvietie returns with the sophomore album with this band that has more in common with Night Wish than your average folk metal band. She must have been holding back in Eluvietie, as she fucking belts it out here. I think what I like about this album is how it reminds me of The Gathering. This is a kinder and gentler form of metal, so if you are more on the blackened side of folk metal and not open minded this won't be for you. There are enough melancholy undertones despite the more soaring vocals on the epic minded choruses. They even head into a more progressive journey on the title track, with a heavier riff driving it and the folk instrumentation sticking it's bow in the water. "Burn" has a riff with a thick groove driving it, that they break down to a more tense palm muted section when the vocals come in. I don't think this song is on the same level of excellence as the first four, but it doesn't suck.

Things move in a more melodic direction on "Hang" . This makes the Gathering comparison carry even more weight. I am fine with this considering that the Gathering is not the same band that made "Night Time Birds"  Things get weird for "Sleep". They get experimental with things that sound like a theremin. It's not a very concrete song and more of an atmospheric interlude. Things get back to a heavier tone of "Insomnia" . The song goes in some different directions like a sax solo, The vocals go in a more interesting direction on "Freeze" than they do on "Insomnia" .  There are a great deal of vocal colors in her performance on this album, so have more layers of overdubs than others. There is an abundance of them with the choral section that goes into the kinder and gentler sway of "Fall". The ambiance of this song reminds me a little of the Cocteau Twins.At under a minute this is more of an interlude than a fully fleshed out song.

The albums less metal moments might even be some of the better ones. I think things are pretty interesting with the more experimental and atmospheric "Drown" that does constrict into something more metallic. There are some cool tempo changes on this one. The groove is almost Pantera like in it's sinew. Midway it breaks into a folk section that bridges the song into prog ambiance. "Love Part 2" is more like an alt-rock songs from the 90s. This is not a bad thing. The bass line is very fluid and the vocals work with it's groove. "Death Pt 2" is like if Kate Bush did a ballad for a Disney movie. I will round this up to a 9.5 as it's one of the best metal albums of this kind I have heard in a minute, though marginal to most if it is metal, if you like the Gathering you will like this. Released on Nuclear Blast