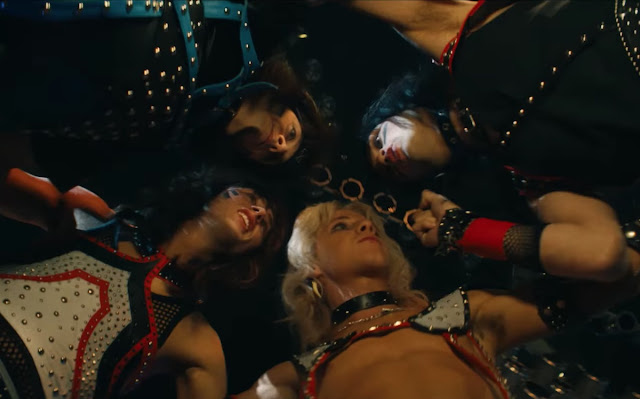 Makes sense that this went to Netflix rather than theaters. Not as trans-formative for the actors as "Bohemian Rhapsody ". The movie measures up pretty much like Motley Crue measures up against Queen. Don't get me wrong Motley Crue was my favorite band after Kiss. But by the time I got to high school I was pretty much over them , and then the rest of my admiration for them got squeezed out by the over produced "Dr Feelgood" To this day still find them entertaining, and have gone to see them as recent as 13 years ago or so. This movie was based off the book of the same name. The book is written from the perspective of all four members of the band, with Tommy Lee and Nikki Sixx dominating the narrative.You would have thought Nikki already got most of this off his chest in the "Heroin Diaries" which touches on a great deal of the addiction subject matter. Nikki is the center figure of this story and it is his band.

Of the core membership all but Vince Neil felt pretty dead on with Mick Mars being the most convincing followed by Tommy Lee. The guy who plays Ozzy was ok unless you were looking at him dead on them the resemblance faltered. The biggest cast member missing would have been Pamela Anderson, though no Vanity either. David Lee Roth and Slash caricatures were involved, there could been more cross over with Quiet Riot. While some of the "Too Fast For Love" album is featured in songs being written or performed if you went into this knowing nothing you would assume "Shout at the Devil" was their first album. If these band movies keep getting pumped out  then the formula of this is how we started the band, here is where things got rough to we have reunited and everything is great.

Having grown up watching the rise of this band, I have a different perspective on hos the time shifts occurred The theme is sex, drugs and rock n roll.. If you are doing a film about a rock band I think that those things are a must . It was entertaining enough for me to watch it all the way through in one night.  How good of a movie is it lines up with how how good of a band are Motley Crue. Mick Mars in this movie is the best acted . In real life he was  the most talented member of the band . I don't think this movie is going to win over any new fans, but it's fun.
Posted by Wilcifer at 10:28 PM