Priests : " the Seduction of Kansas" 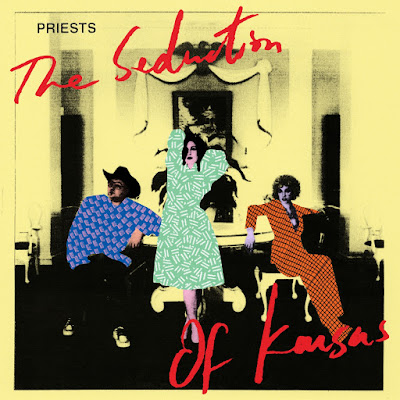 While it got a  great deal of  critical acclaim I never really gave  "Nothing Feels Natural " much of a listen. Because despite what I do here, I don't invest much in the record reviews of others, because, I am more concerned with how album is going to compare to the kinda of stuff I normally like. I did go back and check "Nothing Feels Natural " out after listening to this album, and it is safe to say this one doesn't come close to comparing. In fact the first song has more of a new wave Blondie like vibe to it. The guitars when they are audible are not as cool as the tones captured on the first album.

The title track is more angular in it's groove. The production is a little weird . Most new wave from the 80s had a deep reverb to the mix, where this mix is very dry with the vocals up front. The bass begins to fill some of the gaps on "YouTube Sartre" while the guitar goes off into weirdness. So far the production on this album is very inconsistent. My first impression is the bass needs more balls to it. As it is it keeps the groove from being as slinky as it should be. On a song like "I'm Clean" the song writing compensates for this.  They begin to run out of gas on "Ice Cream" . At times they get more upbeat, but I would never call this band punk by any stretch of the term. I am glad they do get marginally more aggressive on "Good Time Charlie" .

In terms of song writing they are hit or miss for every good song there is something like "68 Screen" that seems like an idea of a song that was never fully fleshed out. They do manage a pretty decent guitar tone for " Not Perceived" , this allows for the song to be a little moodier. This song also offers more in terms of dynamics. The guitar becomes more discordant. Lyrically I think this is also the most interesting song so far. They get closer to the zip code of punk on "Control Freak" .  That however does not mean it's one of the album's best songs, as it's not as inspired as most. They continue in the same direction , but with less of an edge on "Carol".

Truth be told I would say this is new wave influence indie rock rather than post- punk, because this album is not dark nor is it driven by tension, which are the two most important qualities of how I would define post-punk in how it stands apart from rock music or punk. There is more of a Sonic Youth feel to "Texas Instruments" .The lyrics to this song are the most overtly political, but are balanced out by the music so I don't feel like I am being preached at. I will round this down to a 7.5 there are a few strong song, and then the rest is not a bad listen just not the most consistent. Compared to the first album she has improved as a singer, but the songs are not as good.