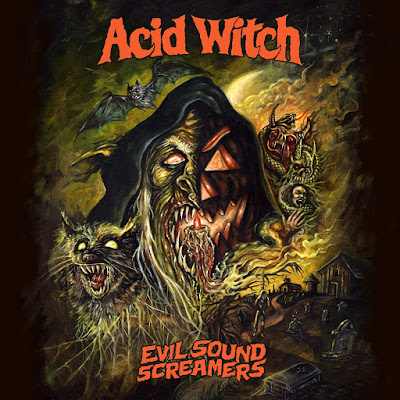 Not only did this album come out today, but it's Halloween themed so this had to be reviewed today . When it kicks in the vocals don't follow a typical death metal grunt but have a fiendish cackle to them. The 60's keyboards add spooky camp. With a bass tone that reminds me of Acid Bath they are heavy enough to be metal without forgetting about songwriting or just trying to bludgeon you. After this  they go for a  more blatant in your face metal and the vocals go down into more of a growl. "Cheap Gore" finds them continuing along a more death metal like path, though the riffs to this song have an engaging groove. The album continues to be strung together with samples in-between the songs to keep the Halloween mood.

"Nain Rogue" plays into local folk lore. It has a more bull dozing drive that the eerie synths balance out. The vocals take on more of a evil scowl that they typical lower death metal growl we hear in other sections of the album.While doom is an influence on this band and heard touched upon on "Mutilation Mansion" I would not refer to these guys as doom. I like the more Celtic Frost like vocals that are layered against the lower growls on this song. This album really excels at the mood it creates and is not a one trick pony by any means , elevating it above most of the death metal I hear.


"Hardrock Halloween" throbs with a sludge like pulse though the guitar riffs has a more traditional classic metal feel. A minute into the closing homage to horror " An Evil Sound Screaming" there is a instrumental portion that reminds me to "Tubular Bells" otherwise known as the theme to the Exorcist. The balance of ambiance and death metal works really well and I can see this appealing to people that might not normally be into this flavor of metal. I am a big fan of the fact it's all pretty dark. I'll round this one up to a 9.5 , making it one of the year's better death metal albums.
If you are too much of a pussy step away from your Siouxsie and the Banshees albums to check this out then it's your loss.