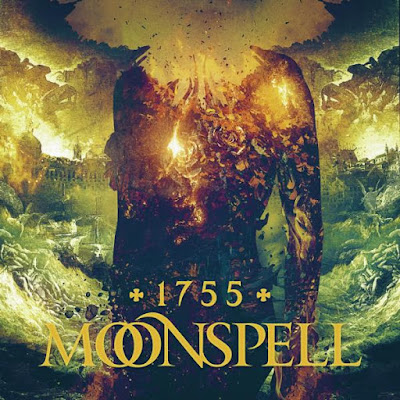 The long time gothic metal act from Portugal is back with a concept album. The title refers to  the  year an earthquake hit Lisbon, which is the story this album tells. So it' a good thing it's sung in their native tongue rather than English since that is an odd story for these guys to tell. It's hyper dramatic with the vocals being barked out in his gruff voice. Exotic instrumentation  joins the big choral arrangement that over accents the song's punches on the title track. The more gritty vocal approach works better for what they are doing here. "In Tremor Dei" has more groove than the first two songs. The big chorus that makes everything sound like something from "The Omen" sound track is present for this song as well. They stomp along more of a middle road here as it's neither death metal or doom. Sung vocals come in midway into this song , though they are not of the Type O Negative variety that these guys used to employ.

Production wise this album sounds really good. It would have to considering all the elements they have added to their sound here. The whose title translates to "Disaster" has a riff that would not sound out of place on a more recent Ozzy solo album. It gets a little more tempo than what Ozzy would do and the vocals continue using a more Sepultura like approach. They continue to stay on the middle of the road, making this feel like symphonic metal. The vocals start sounding a little stale once we get to "Abanao". The problem becomes for this to be metal I need it go to some extreme in once direction or another. The narrative doesn't really invoke any feelings of depression , dread or even anger. I need metal to at the very least be aggressive. I often complain that death  metal is only focused on aggression, while this is true that is a feeling they can sell me on. But I also don't go see disaster films.

"Evento" struggles to reach thrashing speed. There is not enough power behind it to make me bob my head. So nothing here is really drawing me in. It sounds good and is put together well, but there is nothing below the surface. "November 1st" finds attempting to somewhat sing a little more. I guess it's a good thing he is not doing to the crooning as when I some him try to attempt it live it was typically terrible. The riffs sound like Ozzy b-sides. Though the sung vocals that come in as the song progresses are an improvement if that is him. "Ruins" is another mid tempo stomp that seems like it might go over better live. It's one of the first songs that shows memory of their goth past. The last song also brings out some of the ghosts of their past. I think the use of synths here is more well done than the bulk of melodramatic orchestrations that have made most of the songs on this album feel the same. I'll round this album down to a 7.5. They play all the right notes , but miss most of the heart strings they should be pulling.