Gothtober - Flesh World : " Into the Shroud" 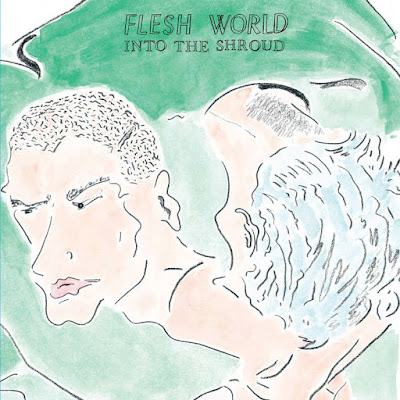 I once swore of Siouxsie tribute bands as the influx of them at one point was becoming unbearable. This band from San Francisco at least cashes in on less explored sides of Siouxsie. The mix is somewhat 80's punk lo-fi, but allows for some atmosphere.  The title track as not as compelling as the opener as it goes by in a quirky indie blur. The chorus to "Knock to Answer" also falls a little flat though the guitars do some interesting things in the background. The could have stood to have been dialed up in the mix. "To Hell With Your Purity" has more of a punk attitude to it. I like the lyrics better to this one. The punk thing continues on "Problem With the Youth Bulge". While their is a good dose of indie rock indifference to their sound and the vocal delivery, it would be more fitting to say these guys are moody rather than dark. They are dark enough to fall into the post-punk genre, though not death rock at all.

"Tell Me I'm In Exhale" took a couple of listens to grow on me.Its more on the indie rock side. I am not sure why these kids are being called dream pop as this song is almost more like Hole. There is strummed guitar on the 90's like alt-pop of "Ship Him To Shanghi" which sounds like some of the Cure's poppier moments. The album closes with "This Great Cheap Face". This one is at more of a post-punk pace. The vocals don't really do much for me on this song, though once again the guitars are pretty cool yet too far back in the mix. Live these guys would probably be really good as the vocals would fall back behind the guitars.I can hear the Siouxsie influence again on this one. You know I have to be careful what I ask for as not enough Siouxsie finds it falling more into indie rock blandness .


As far as indie rock goes they are dark and moody enough for me to stomach it. Though they are far from being among the darkest of the bands I have covered this month and work more off of their odd quirk.They have potential if they would give into their dark side and mix the guitars up louder. I'll give this album a 7.5. It was released on Dark Entries a record label that has an interesting roster than goes from indie rock like this to edm from France.