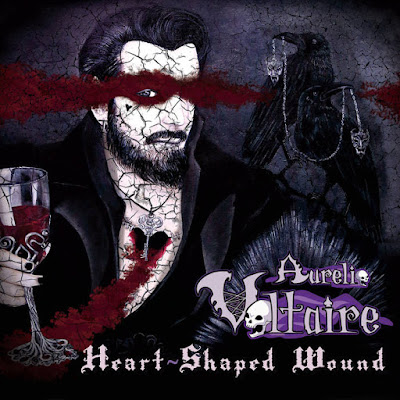 This Dragon-con mainstay has become a staple in the more geek oriented goth scene, but we have never really sat down and dissected one of those albums to ask "But is he any good?" So that what we are going to do with the album he released in September. The opening song reminds me of solo Iggy Pop playing rockabilly despite the best efforts of the strings to paint another picture. There is more of an atmospheric feel to "Human Nature" that finds him going into a higher mid-range. It's a little too upbeat for my tastes and sounds like a Neil Diamond song meets the 80s. He teams up with the singer of Arch Enemy for "Leaves in the Stream" which is about as metal as Nightwish covering a No Doubt song. There are some harmony guitar parts , but far from what we consider metal here.

Piano plays a more prominent role in "Butterfly" . Lyrically this sounds like something on an album made for children. You have to be a fan of his to make it all the way through that one. He takes a more circus like folk tone with "In Disguise" that sounds like he might have lifted it from a filking panel. The intro to "the Ones Who've Hurt You" reminds me of the Eagles. Midway into this album I am beginning to understand why I have never bothered to stand with arms folded all the way through one of his shows. At five minutes that song gets long winded all on it's own. Jeff  Buckley would drown himself again rather than hear Voltaire's cover of Buckley sr's "Hallelujah".

"the Necropolis of Former Lovers"  has a restrained rock feeling to it. His overly accented lyrics might be one of the things that bug me about his singing. The chorus is understated to the point of falling flat, but I am not into filk rock, so perhaps it's a stylistic choice, but since it is my blog we are going of how it feels to my ears. I think what he does on "Folly of Love" does actually succeed and the biting wit he typically exudes finally makes itself know. Then there is more uptempo "A Romantic Guy" that sounds like it's from a Broadway Musical. I'll around this down to a 6.5, which is still better than I thought this album was going to do half way into it.