Gothtober- Live Review : In This Moment @ the Tabernacle

The desire to see live music has waned somewhat over the course of the past year. So far catching Emma Ruth Rundle and Tombs have been the highlights for me. Big shows have become less of my thing. I did see the Cure and the Used last year, but I seem to like people less with every so choosing to be around large numbers of them takes a large dose of motivation. But I found myself at the Tabernacle, after first assuming this show was at the Masquerade where Veil of Maya was playing. So missing the Swedish nu-metal prog band Avatar who opened the show and coming in fortunately mid way into Of Mice & Men’s set. They were playing notes that on paper would equate heavy, but this new metal school of processed distortion never cuts through with the power and volume as if this was Morbid Angel or Slayer. The growling also lack conviction. They could not sell me on the fact they were playing metal, no matter how hard the suburban crowd wanted them to be. The evening all the way around was an example of how the definition of metal and the general populous’ is not on the same page and are more easily persuaded with choices that are easier to swallow. Things change , but no matter how close to Halloween it’s been I have never been at a metal show where they crowd would approve of “Thriller” being played over the p.a. 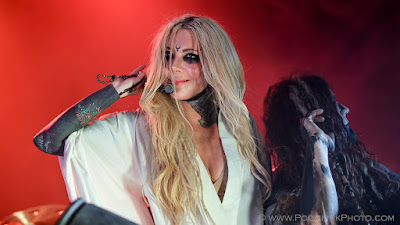 In This Moment might not be metal, but they are very entertaining when it comes to the spectacle they put on live. I was struck with the feeling that it was like watching Katy Perry’s Halloween special. In fact Maria Brink and Perry might have the same voice teacher because they both speak in the same voice in-between songs which seemed like something that was learned in order to prevent them from screaming in-between songs. She also did almost as many costume changes as Perry, most of which were changes from one Stevie Nicks like cape to another. There was a slight burlesque element to her performance. She had two backup dancers , which it should be noted that if you are at a show where there are backup dancers you are not at a metal show, this applies to Motley Crue as well. The choreography was not on Madonna level and they went to the well one too many times for the one your knees head bang to swing your hair stripper move. Brink is as entertaining to watch with the volume off as she is with it on. She had a skin toned Spanx like body suit on underneath her costumes no matter how revealing it wished to be. She does have a nice set of hips on her. Vocally she did the best when she was in her Amy Winehouse inspired chest voice. Her upper range war practically non-existent and her lower notes disappeared in the mix. She did sing the hell out of the cover of “In the Air Tonight”. Though she moved a little like Mariah Carey in a couple of places that broke my focus. The harsher metal voice that she didn’t use as much as I expected was the main thing that separated her from being in the Katy Perry club. 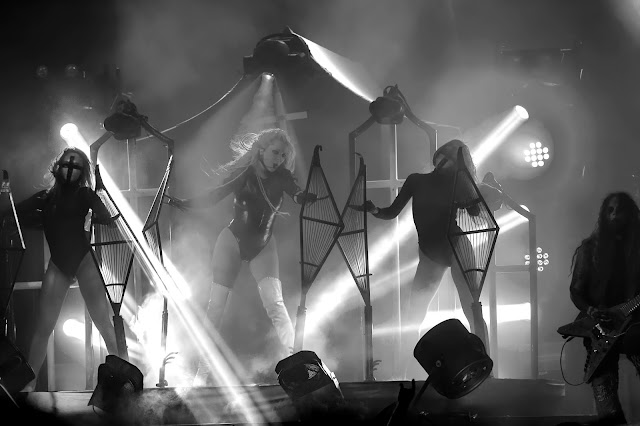 I was surprised how heavily there set leaned on the new album. One of the high lights was during one of Brinks costume changed when the band played instrumental versions of “For Whom the Bell Tolls” and “ Creeping Death”. The crowd was blend of bros, goth kids, people you are sure you saw at past years Dragon-cons, and trailer trash in Five Finger Death Punch shirts. There were two girls whose faces would be next to Websters definition of “basic bitch” standing behind me. The sentence that cemented this stereotype they were living was “I was crushing on this guy so hard, but I did not recognize him on Instagram”. By her own admission of sorts she basically said that In This Moment stood for people loving one another, helping each other and was against violence, war and hate, so opposed to all the subject that makes for good metal. Metal is not about motivational speeches, but saying “fuck you I’m going into my empowering fantasy world of satan, barbarians and post-nuclear dystopia”. Regardless they put on a good show, that is entertaining in a way that Katy Perry were to a Halloween show.
Posted by Wilcifer at 9:54 AM

Email ThisBlogThis!Share to TwitterShare to FacebookShare to Pinterest
Labels: in this moment, Live review, Of Mice and Men. Maria Brink, the Tabernacle