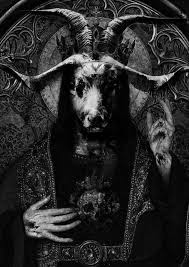 Seems like as fitting of a time for this as any. While I by posting this for Gothtober , I am not implying all goths are satanists or being goth makes you a satanist. I think there is enough crossover in the subcultures for this article to fall under the Gothtober banner, plus this is my blog so I do whatever the fuck I want on here. Halloween is a great Satanic holiday. So on this holiday we should celebrate what Satanism really is . In doing so it is important to reject what it isn’t. There are many different brands. Some take a theistic approach and believe in an actual entity as described in the King James and others are just secular humanists with an attitude. Whatever the case, I think believing in anything that aligns with the left hand path falls into this. However in recent years hipsters have been using the banner of Satanism to push agendas more in line with right hand or Christian beliefs so I think it’s important to draw some lines in the sand in this regard. We are going to use the least magickal of any Left Hand Path school The Church of Satan as the bar by which Satanism is being measured. Now there's a difference between Luciferianism and Satanism, but you don’t know it then, oh well... I am not taking the time to go into the 101 of that this is more of a 201 discussion so this article might not be for you.

We are just establishing some  basics as to what the fundamentals are and are not .Thus  the object here is not to say Anton Lavey is the only way .In fact when it comes to magick his Enochian is laughable. It’s all for show, yet the bulk of his philosophies are pretty solid. During the occult boom of the 1960’s he was a middle finger to the peace and love bullshit of the hippies. The hippies might have been into sexual liberation, but aside from that they followed a philosophy more in line with the myth of the original hippie Jesus. The christian teachings obviously espouse such concepts as turning the other cheek and the meek inheriting the earth, This is the kind of enabling bullshit that would inspire one to fight for the rights of the weak. This of course is diametrical opposed to Lavey’s school of thought and if we are saying the very baseline of Satanism is the rejection of all christian concepts , then should be in opposition to anything that calls itself satanism. Lavey’s philosophies have more in common with social Darwinism, instead of wasting energy on the weak who don’t deserve it.

Why is there confusion in this regard? It goes to the the foundation of the individual. Occult means hidden. To be an occultist one must seek out their own path. When I was teenager the internet did not exist. I had to go to the occult section of the new age bookstore, pay for the books since Libraries are not going to carry real left hand path materials. This might sound like a get off my lawn moment, but the generation of thin skinned kids coming up now spend less time reading and more time crying online how they wish their parents would accept them as satanists. What the fuck? If you need your parents acceptance then put your diaper back on and go take a nappy nap. Satanism is about empowerment of the individual and not caring what others think about it.

What we have established is sure it might suck that certain political parties align themselves with the Christian Church. That should be rejected. In rejecting that however it doesn’t mean it’s acceptable to embrace other Christ like philosophies and start enabling those who won’t fight for themselves. Satanism would teach if you won’t fight for your own rights you don’t deserve them. This is also a universal law of other spiritual teachings, whatever you put into life or the universe if what you get out of it. If you can not focus on your own intention and want others to do it for you then you are a parasite. No amount of black clothing or Baphomet statues changes this.
Posted by Wilcifer at 8:08 AM