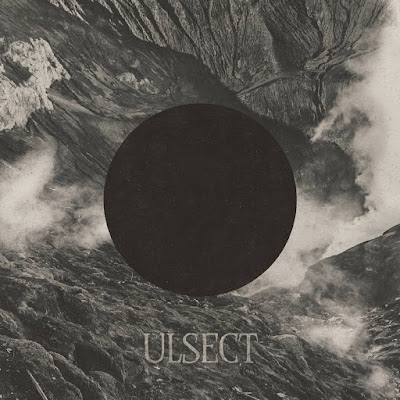 This band from the Netherland's released their debut album back in May. It features members of Textures and Dodecahedron. They employ some interesting angular riffs to contrast some of the atmospheric sections. You can hear hints of hardcore in how the vocals are barked rather than committing to a full on guttural growl. There is no question the darkness they dig into has a range of dynamics.There are some "oh shit moments" when I realize I am on the next song already. The black metal influence peeks out on the second song as well. But this album is more fully committed to being death metal. "Diminish" just works off of what this band has already established they do , just with the bass coming up in the mix. "Moire" is a deeper dive into dark with it's deliberate march. Though it almost serves more as an intro for " Unveil" than being a song in and of it's self . "Unveil" is a more dynamic moment for this album with the melodic break approaching the song's midway point. But going into the blast beat at the end is a little predictable.

"An Augury"  is another instrumental that works off a slower tempo, though it feels more like an idea for a song than an actual song that goes somewhere. Songs tell stories even if they are instrumental. Every story has a beginning , middle and end, so for a song to not have these it is falling short of the story it should be telling. That is why the rule around here has been "cool riffs alone do not make a good song" the riffs are the words that tell this story and one good word is not a story. If you are thinking that is too much to ask from music than go back to sniffing glue. "the Ending" is another dense slab of death metal. The chugged accents play to the band strengths. The growls at this point in the record begin to feel like a one trick pony. While this is a defining quality of death metal it can become tedious.

The album closes with the six and a half minute "Maunder" . It tells the story I spoke of earlier. It starts off slower casting a sonic shadow. It begins to build the vocals have a more spoken quality before going into the roars and screams. Still at the mid way point they are using restraint and not getting carried away by the need for speed, which would feel like they are taking the easy way out. The riffs are creepy . Still compensating for the lack of melody in the vocals which at this point are just a texture. Rather than racing away with you they allow the song to dissolve into atmospheric noise proving they know how to tell a story without relying on the typical death metal plot devices. I'll give this album a 8 while it falls into some of the genres limitations it rises to the occasion more often than not.