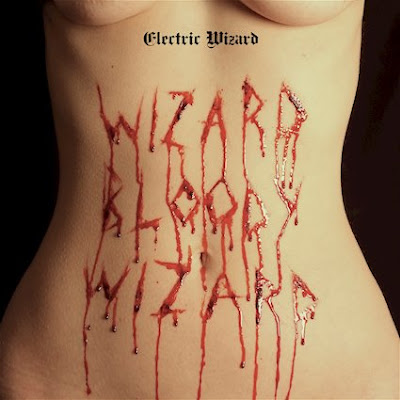 The band's 9th album opens with the nihilistic blues of the lead single "See You In Hell". Despite the album's title it's somewhat less of a love affair with Black Sabbath and more of a homage to the fuzzed out garage rock of the 60's. The drummer was obviously influenced by Mitch Mitchell's drumming on "Manic Depression" here. Not as aggressive as what we have heard from them in the past, but it sounds better the more you dial up the volume. The band took it upon themselves to handle the production in their own studio. Sonically this allows for less bells and whistles as it's stripped down to what the band sounds like just plugging straight into their amps. The creates a dry more more ranged sound, and thus a more retro affair.

The tempo shifts into more a methed out boogie on "Necromania". Lyrically "Hear the Sirens Scream" sounds like he went into the vocal booth with no lyrics prepared and just vamped off the top of his head. This song also has a more of a jamming feel to it and is not as focused in it's attack. It begins to drag a little once they hit the seven minute mark and I begin to wonder if it's going anywhere else or just more of the same. The answer they give me after declaring "drugs are their religion" is a guitar solo. It could have stood to come more forward in the mix rather than sitting back in the wall of guitar.

A keyboard does appear at the beginning of the three minute drone "the Reaper". "Wicked Caresses " embraces a darker more traditional doom approach. It doesn't wallow in the linger tempo and hover under 90 bpms, when not in the total doom of the verse riff. They stay on a slower doomy shuffle for the closing anthem "Mourning of the Magicians" . He returns to claiming he will sill you in hell so I had to check to see if I had let the stream loop back around to the beginning , so this one didn't hold my attention as much as the first few songs. I also notice that his voice lacks the effects it's normally drenched in on their other albums. I can hear how this gives it more of a Coven like sound and less of a mid 70s Ozzy. But it makes the vocals cut through less like another instrument and showing he is a one trick pony here.Other wise this is a pretty solid album, I'll give it an 8.5, it has less apocalyptic thunder than albums like "Dopethrone" but I like the trashy exploitative mood it creates in the simplicity of the songs. They also prove you don't need long pondering wandering to be doom.